Exactly as promised, which is a pleasant change of pace considering Blue Oval’s Bronco tardiness record, Ford has presented the 2022 Bronco Raptor. Allegedly, it’s “Built Wild to the Extreme.” Well, let us be the judge of that.

Will the 2022 Ford Bronco Have What It Takes to Shine Across the Raptor Crowd?

Right from the press release title, Ford is dubbing it as the “most powerful street-legal” Bronco ever. But the 2022 Ford Bronco Raptor should come with many more asterisks because of many other Raptor caveats. After all, the good folks over at Hennessey Performance might have a little $80k, VelociRaptor 400 argument about that.

And they are extracting no less than 411 horsepower out of a 2.7-liter, twin-turbocharged, V6 powerplant. So, a stock Bronco has no chance against it even when it comes to a quirky drag race. Sure, it remains to be seen what exactly Ford has in mind with their targeted delivery of “over 400 horsepower.” Especially given the hint that we are dealing with a “Raptor-exclusive twin-turbo EcoBoost” V6 engine.

Who knows, perhaps Ford is going to surprise the 3.0-liter V6-expecting audience with a cool 3.5-liter taken directly from the F-150 Raptor sibling and slightly detuned for a little less than 450 ponies. Lord knows Blue Oval fans would rejoice and the Bronco Raptor could then fight off the V8-powered Jeep Wrangler Rubicon 392 from a much better position.

One that includes both desert racing and rock crawling, to try and satisfy everyone. Both Ultra4 motorsport enthusiasts and those who were persuaded that Chevrolet will never make a modern K5 Blazer... so they went with the next best sixth-generation Bronco thing.

Well, the jury is still out if they were right to switch from team GM over to Blue Oval’s merry band of camping, trailering, and even Everglades dwellers! But that’s a rhetorical line of thought that only the multitude of owners will be able to answer.

Back to the 2022 Bronco Raptor, our hypothetical issue now has to do with its ability to jump out of the expanding Raptor crowd. After all, aside from the competition, both in OEM and aftermarket form, the newly extreme SUV has to worry about internal truck competition as well. From both the next-generation Ranger Raptor and current F-150 Raptor variety. Not to mention the latter is soon becoming even more enticing with the highly-anticipated introduction of the F-150 Raptor R.

Now, another question that might become a forever-unsolved mystery. Have Blue Oval’s corner-office head honchos dwelled upon the nasty thought of doubling the Raptor R offering with a V8-powered Bronco Raptor R that would clearly shame any Jeep Wrangler Rubicon 392 out of Hemi existence? Such devilishly Hellcat performance-toting ideas on our part, right?

Better get back on track, though. So, aside from the VelociRaptor 400 and the like-minded aftermarket competition, the only other real external threat against the beefy Bronco Raptor comes from the expensive Rubicon 392. That means it’s very much a game of affordability that needs to be played by Ford to have a chance of trumping Jeep’s $75,095 starting MSRP for a 2022 model year Rubicon 392.

The 2022 Ford Bronco Wildtrack starts at $47,780, so they do have some leeway. My personal opinion is that people who want an extreme Ford SUV will have no problem opting for the new 2022 Bronco Raptor. On the other hand, it’s an entirely different story with those that still have not made up their minds between a dune-bashing, rock crawling SUV and an equally high-performance pickup truck.

Especially since options are getting wider by the day. Remember, also based on the EcoBoost V6 F-150 Raptor, Shelby just presented their 2022 Baja Raptor. A beefy truck with iconic Shelby badging, as well as 525 horsepower. And a huge price tag of $124,820. Sheesh, where is this aftermarket world going to... 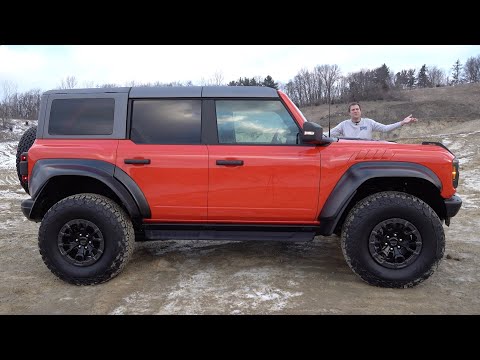