1 Elvis Presley's Jet and Pamela Anderson's Trailer Up Come Under the Hammer
Car video reviews:
Up Next

Citroen to Use Fiat 500C Approach With DS3 Airflow Convertible 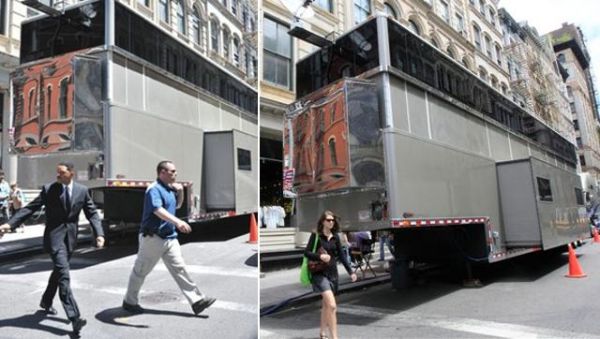 The Heat or Babygirl, as the American actor likes to call it, is a mobile mansion that Will Smith bought a few years back and has now reportedly brought it to on Broome Street while shooting for Men in Black III. This, however, managed to upset the SoHo residents, who are being bothered by the trailer’s size.

The Heat is a double-decker mobile mansion that offers more space than a two bedroom, two bathroom city apartment. The 55-foot vehicle has no less than 22 wheels and a gross weight of 30 tons, which gives us an idea of how it became to stand in the way of the free flowing traffic.

The luxury motor home, for which Smith paid no less than $1.8 million, has now been move to an empty parking lot about half a mile away from where the shooting is actually taking place. This has made the actor comply with using a much smaller 35 foot trailer in the meantime.

In addition to The Heat, Smith also brought a second 55-foot trailer, featuring his own full-sized gym, with him to the set, the NYPost reports.

Below you have a gallery of images showing The Heat's interior from back in 2004, in standard form and before being modified to Smith’s personal choice. The trailer is made by Anderson Mobile Estates and Smith had it customized by creating makeup and wardrobe area, screening area, lounge and working area for his staff and writers.

The third MIB installment is to debut in late May 2012 in the United States.