Home > News > Auto Motorsport
Stephen Rivers
Joel Steele proves that good drivers can tame even the most powerful Mustang. His 1,900-horsepower Ford uses twin-turbochargers and a proper H-pattern stick shift to dip into sub-7-second quarter-mile passes. One of those passes sets a whole new record too.
6 photos

Steele came to the World Cup Drag Racing finals knowing that he might set a record. For the past year or so, it's been held by Joel Grannas and his Toyota Supra. He went down the track in just 6.84 seconds at 213 miles per hour. The best Steele has ever achieved in his car is 6.95 seconds.

To overcome that incredible time, Steele has outfitted his Mustang with some of the most advanced racing tech available. Some of it is even visible from the front bumper. There we see the turbocharger inlets beautifully tucked into the grille itself.

Below those inlets, we see the exhaust bending out from underneath the bumper and exiting just ahead of the front tires. Those turbos, by the way, are Forced Inductions 76/83 units.

The block is a first-gen Coyote V8 but features Frankenstein ported and polished heads in addition to 1mm oversized valves. All rotating internals are forged and, as a result, are good for up to 50 psi.

The transmission is really where things get special, though. It's a Tick Performance Ultimate Race unit with four gears. Inside, an integrated spray bar actually douses the gears in oil whenever the car is under full throttle.

To ensure fast shift times, the Advanced Clutches slipper clutch doesn't need to be engaged aside from pulling off of the line. In between clutchless gear shifts, the Holly Dominator engine management system actually cuts fuel just long enough for the gear to change.

Of course, none of this matters if Joel can't launch off the line hard and he starts out with an issue. One of his tires has developed a slow leak at the start of the video. To remedy the situation, the team actually overfills the tire so that by the time it launches, it'll be right.

It works perfectly as Steele sets the new record on his very first pass completing the race in 6.81 seconds. He actually sets it against Joel Grannas, the guy who owned it before the pass. Grannas doesn't even dip below 7 during the pass.

The next day, the Mustang is hunting for even better results. First, they pick up new tires. That sets them up for more success as they get down the track in just an identical 6.81 seconds.

It's hard to imagine the record dropping much more at all. That's still in the crosshairs, though. According to Joel, the Mustang had a mechanical issue on the last pass, so who knows that the limit will end up being when everything works. 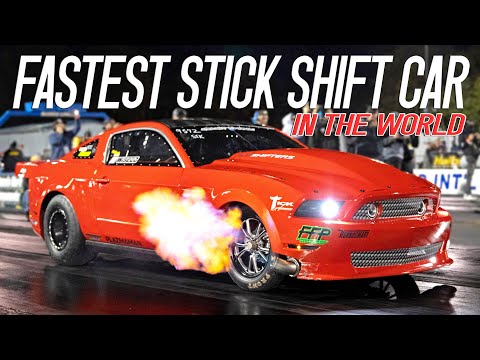