3 Stock RAM TRX Drag Races Standard-Cab Supercharged F-150, Not So Much a Gap as a Void

What can you do when the “grand yuletide tradition” of delivering a roaring Christmas cheer isn’t quite as satisfyingly fast as in the past? Well, if you are John Hennessey from Hennessey Performance Engineering, there is a simple solution.
23 photos

Fans of the Sealy, Texas-based tuning powerhouse (and limited-series supercar maker, let’s not forget that) might know what the whole shenanigan is all about. For everyone else, all we can say in a nutshell is they like to have fun. Not just with their roaring aftermarket masterpieces. But with everything else, as well.

And around Christmas they established a sort of cool new tradition a little while back: take a fast car/SUV/truck and strap a Christmas tree on top of it. It’s not just for the giggles, though, as a professional racing driver then takes over the controls and makes wonderful use of the company’s proving grounds.

This year’s entry for the internal “world’s fastest Christmas tree” competition was John Hennessey’s ride. A 750-horsepower tuned 2021 Porsche 911 Turbo S. With Spencer Geswein at the helm, they were all a bit disappointed to find out the German sports car would only muster the power to reach 175 mph (282 kph).

Which is a good run on its own. But nowhere near the 205-mph/330 kph performance, it might achieve without the Christmas tree (as tested). It was not fast enough to beat the old record holder either, an HPE1000 Jeep Grand Cherokee Trackhawk that reached 181 mph (291 kph) back in 2019.

Being the intrepid spirit that we know he is, John Hennessey did not give up and decided to jeopardize the atmosphere of his holiday season by sneakily using his wife’s car for a “world’s fastest Christmas tree 2.0” attempt. This time around, the perpetrator of the deed would be an 800-hp tuned Audi RS 6 Avant. A station wagon carrying a Christmas tree sounds way more conventional.

And Geswein proved a traditional grocery getter was all they really needed to nail another record figure. Case in point, he reached a top speed of 183 mph (294.5 kph) with the Christmas tree on top... and yet another 205-mph run without it. By the way, don’t miss the reaction part from the 2:50 mark when the missus finds out what happened with her daily driver. 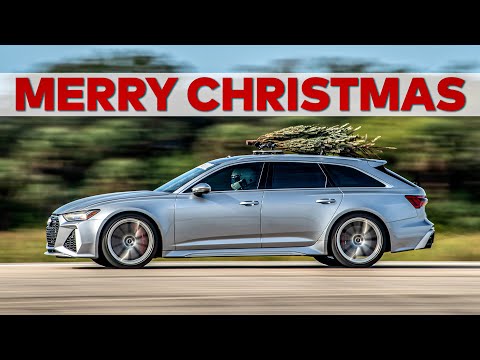