As far as Dodge is concerned, the limited production widebody Demon is the most extreme performance version of the already mighty Challenger SRT Hellcat. And, according to official figures, it should be more than capable of using its monster of an engine to reach timeless drag strip glory.
27 photos

But we all know that track conditions and, above all, the skill of the driver behind the wheel can have massive consequences. As such, anyone capable of performing flat 10-second passes in a bone stock Demon is usually considered a highly talented owner. But how about the lady of the household performing constant high nine-second runs?!

That’s certainly of interest, according to the Drag Racing and Car Stuff YouTube channel, which allegedly discovered Marc0779’s (somebody who’s definitely well known among Mopar aficionados) wife at the wheel of the crimson Dodge Demon seen in the video embedded below.

Although the description touts a “bone stock” Dodge Demon doing a lot of 9s passes back-to-back on the quarter-mile, the presentation footage (from the 0:55 mark) shows a slightly different reality. The Demon isn’t equipped with its regular set of wheels and tires, instead featuring an aftermarket set from Weld that got wrapped in Mickey Thompson’s ET Street R tires.

That’s helpful, for sure, but it's not going to detract from the fact that we’re indeed faced with a skilled driver behind the wheel. That’s obvious not just from the numerous single runs (all of them clocked under the ten-second mark) but also from a trio of “bite your hand off” encounters with competing muscle cars.

First up, from the 1:30 mark, is a seemingly unsuspecting Dodge Charger with a slow response time driver. Naturally, the gap is humongous: 9.9s for the Demon to the Charger’s 11.52s, while the trap speeds are almost 10 mph (around 16 kph) apart.

A blue Chevy Camaro hopes that GM performance will have more leverage from the 3:43 mark, but the Dodge comes with another stellar result (9.88s) after almost pulling a wheelie during the launch. The same goes for the white Ford Mustang from the 4:04 mark, and the gap is so massive the camera guy doesn’t even bother to show us the Blue Oval’s result... 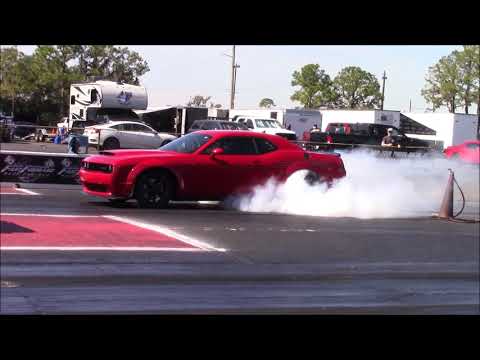