The Japanese were always more creative with their tuning projects. And while some people say they ruin cars, everything I've seen looked either awesome or super-original... like this Aston Martin Vantage Roadster with a real race car diffuser and Vossen wheels.
83 photos

Oh, Vossen, why are you always there when something weird is happening? This pair of Astons is almost as radical as the Rocket Bunny Golf GTI twins, but because of the premium red paint, you wouldn't notice.

The yellow headlights aren't for show. Both vehicles were built by Alpha Classics Racing, Japan’s Aston Martin Racing division. When they made their debut at the Tokyo Auto Salon in January, everybody was blown away, understandably.

While the Roadster still maintains its burgundy leather interior and those sexy humps, the coupe has been stripped out to race spec and fitted with a roll cage. Race suspension and brakes, along with a limited slip differential were installed.

But the real eye grabber is ACR Performance’s new widebody package which includes a minimally sophisticated carbon valence kit around the perimeter of the car, broken up only by the race-spec rear diffuser. And the wheels are now so broad that they about half of the rubber sticks out.

Even though it's got the same diffuser, the roadster is more of a road car and has been fitted with a supercharger to increase the 4.7-liter V8's output above 600 HP. That absurdly cool stance is thanks to Airrex air suspension, while the 2-piece wheels are finished in matte gunmetal and brushed anodized.

This is not the kind of Vantage Henrik Fisker envisioned. But somehow, it only adds to the appeal of a design that's over a decade old. 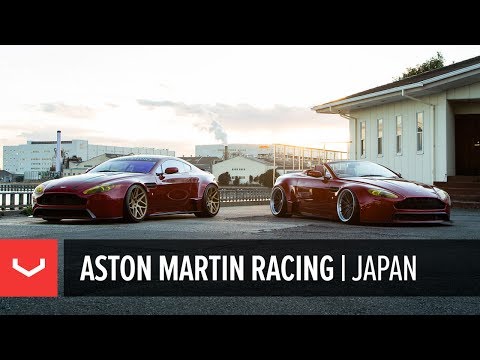