5 C8 Corvette Wreck Looks Pitiful on the Flatbed of a Chevy C50 Truck
Car video reviews:
Up Next

The UAW strike from September and October 2019, as well as the ongoing health crisis have hindered Corvette Stingray production, and the same can be said about the Corvette Z06. Initially expected as a 2021 model, the go-faster variant with a flat-plane crankshaft V8 has been pushed back a year. Looking on the bright side, General Motors has more time to test the high-revving sports car before the first units arrive at dealers.
23 photos

First captured on video in January 2020 with quad exhausts and camouflage from head to toe, the free-breathing performance model returns in another video uploaded by Corvette Forum member “jbsblownc5.” This time around, we’re dealing with no fewer than three camouflaged prototypes that feature slightly wider rear haunches and rear tires compared to the Stingray.

Speaking of which, the yellow-painted car that follows the convoy is wearing manufacturer plates. From the looks of it, the role of that Accelerate Yellow Corvette Convertible is to enforce a safe distance between the test mules and prying ears. Be that as it may, the powerplant of the Z06 is one of the worst-kept secrets in the business thanks to the existence of the C8.R.

Expected to displace 5.5 liters just like the LT5 engine in the endurance racer, the LT6 in the Z06 will forgo pushrod valves and a cross-plane crankshaft. Some say it’ll rev as high as 9,000 rpm, others suggest an output of around 625 horsepower, but one thing is certain. As opposed to the previous generation, the Z06 relies on natural aspiration instead of a blower.

The twin-turbocharged version of the LT6 is dubbed LT7, and just like the 6.2-liter LT2 small-block V8 in the Stingray, the Golden Bowtie is going to offer a bit of hybrid assistance. The hybridized LT2 model is expected to be called E-Ray, while the range-topping Zora pays tribute to legendary engineer Zora Arkus-Duntov who earned the nickname “Father of the Corvette.” 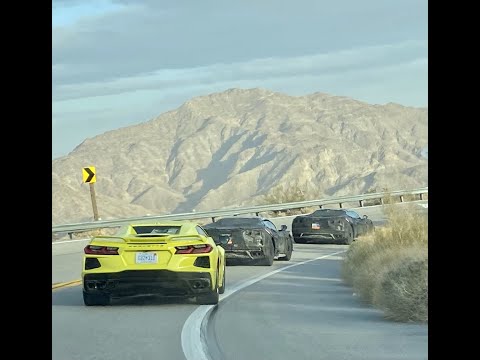