Cristian Curmei
It seems like everyone is making e-bikes these days. But what happens when world-renowned Orbea takes on the e-MTB craze? Well, just have a look, it'll only take three minutes.
10 photos

What you’re looking at is the 2021 Orbea Rise. And just as the name would suggest, this baby will do nothing but rise to the top of any ridge, mountain, trail, or urban jungle, although keeping it constrained to the latter environment would be a damn shame. Why do I say this? Well, to avoid any sort of misunderstandings, there’s a link at the bottom to show you what this bike is capable of. If you still need to read further, the text will be here waiting for you.

Took a gander? Good. I, for one, was left drooling. But then again, I'm the kind of guy that breaks both his arms on an MTB, and three days after the casts are taken off, I'm back on the trails and ridges, so I have a strong bond with these puppies.

But the Rise is unlike any other e-MTB we’ve seen this year. Sure, there have been some nice additions to the MTB craze with newcomers to the Specialized Bicycle family, and even Ducati's e-MTB line, so it was about time Orbea also took a swing at the plate. With all bases covered, the Rise hits a grand slam.

Before we get into it please note that this e-bike is focused more on the biking aspect and not so much on the electrical part. Don’t misunderstand, the Rise includes the newest motor and battery on the market, it’s just that it’s made in such a way as to feel more like you’re actually biking and not just taking a ride on something with a motor.

The frame for the Rise is obviously a monocoque carbon fiber frame. After all, it is almost 2021 and this is top-shelf work. How top-shelf? Well, the frame alone only weighs 5.07 lbs. (2.3 kg), less than your usual bag of groceries. With all other components added, this e-bike unicorn comes in with a weight of 36.3 lbs. (16.5 kg). Folks, that's an e-MTB that weighs less than half than other smaller and less capable e-bikes on the market. But then again, it comes from one of the best in the business.

For suspension, the rear shock allows for a standard 140 mm of travel, while the front fork offers the option of either 140 mm or 150 mm of travel. However, both of these systems have been customized for 29-inch tires, which they themselves bring some effect to the overall smoothness of your ride.

And now for the two most important aspects of an e-anything, the motor and battery. For the motor, Orbea chose to work closely together with Shimano’s new EP8 motor. Basically, the entire bike is made around this motor. The maximum torque is 60 Nm, and the e-MTB comes with customizable speed setting for your region. The top speed is 20 mph or 25 kph. All levels of assist are also completely customizable via an app on your phone.

That’s friggin nuts! When's the last time you’ve heard of an e-MTB offering 8 hours of ride time? Never! There really is no point in mentioning anything else about this bike. Just check the Rise out for yourself, you will not be disappointed. Except for having to dish out $10,500 dollars for the Rise LTD. 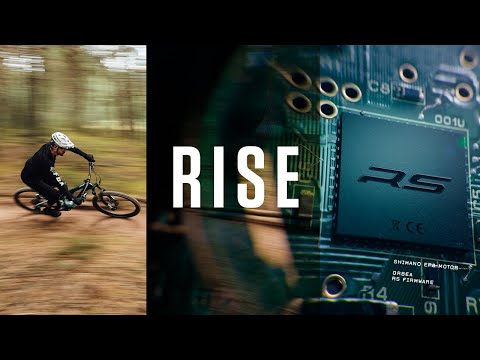