Why Tesla Has Double the Range of the Porsche Taycan: Engineering Explained

The low range of the Taycan has to be one of the most frequently mentioned subjects in our comments section or on YouTube. This is about the most revolutionary Porsche of the decade compared to the most important brand in the world. So, we've got to get to the bottom of this, and a man with a whiteboard and a marker has all the answers.
1 photo
In his latest video, Engineering Explained tries to get to the bottom of why the Porsche Taycan has 201 miles per charge and a Tesla can achieve 402 miles. Myths suggest it's bad engineering from the Germans or a huge technological lead by Teslas. However, the truth is stranger than fiction, as they say.

It basically comes down to a bunch of small factors, the first of which is how range tests are done. The EPA knows that tests are too soft, so it applies a correction factor of 0.7. Porsche got 287 miles of range in a 2-cycle test, which multiplied by that number gets it 201 miles.

However, knowning full well that range was going to be a problem, Tesla used a 5-cycle test which the EPA also allows and thus got a better coefficient of 0.74. But that only adds 23 miles to the official range of the Model S. The batteries also play a part, of course.

Tesla fans might remember how the range of old Model S models got several increases, which was them unlocking more of the battery. Basically, think of it as running on empty in a gasoline car. Of its 93 kWh battery, Taycan only lets you use 83.7 kWh, which might increase over time. Tesla won't say how much of its battery is available, but even as little as 5% more butter could mean 39 miles of range.

Engineering Explained also points out that the Taycan doesn't have the same aggressive energy regen most other EVs have. However, you can get back some juice when braking, which explains why real-world numbers are sometimes better than the estimates. And then we arrive at some maths, which is honestly too complex to repeat but makes a lot of sense. 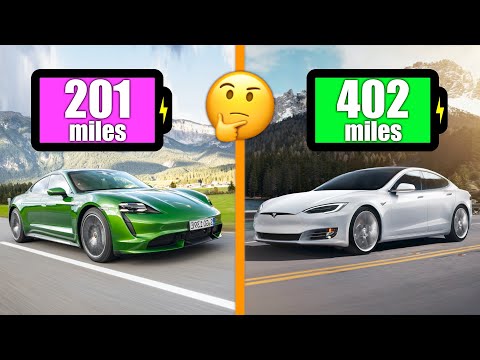