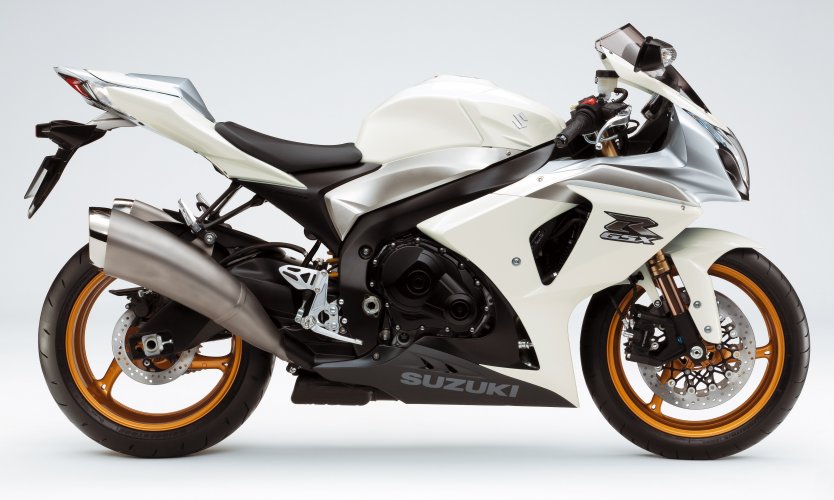 Suzuki GB has launched three white colour scheme models this month, with new variants of the GSX-R1000, M1800R and Bandit 1250SA arriving at UK dealers, all in limited edition.

The limited range has the GSX-R1000 in the spotlight. Taking its first global race win in the UK earlier this season, where Sylvain Guintoli piloted his Worx Crescent Suzuki to victory in the British Superbike Championship, the new white colour version of the 2009 model features a glass splash white and silver paint scheme with gold wheels.

Limited to just 100 machines, this model is available at the normal recommended retail price of £9,800.

The second choice of Suzuki is a model that features GSX-R technology, the M1800R. As an alternative to the more traditional cruiser offerings, the new 'Z' model has been splashed with the same white colour scheme, with a distinctive blue stripe from head light to number plate.

With a recommended retail price of £9,500, only 50 versions will be available in the UK.

Since Suzuki’s sport and cruiser range chose their beauty queens, the street bike range was left to crown its own. According to MCN, bringing white among street bike models is the new Bandit 1250SA 'Z'. Featuring a pearl mirage white paint scheme, with revised graphics and metallic silver wheels, the new 1250 will be available for £6,300, with 100 examples coming to the UK.

Suzuki GB sales and marketing director, David Taylor, commented, "These limited run models offer the unusual combination of exclusivity and value. With the GSX-R1000 offered at the same recommended retail price as the standard colours, and a small premium on the Intruder and Bandit, we expect demand to far outstretch supply."