1 Chevy Camaro Gods Watch Over "Black Mamba," Here Comes a Most Spectacular Save

Fresh off the fourth generation baking oven, Chevrolet’s Impala was selling better than hotcakes in 1965. Just imagine, it delivered an all-time greatest one million-plus deliveries in the United States, something really hard to fathom in today’s lackluster environment. Naturally, it had its halo version in the guise of the Impala SS (Super Sport).
25 photos

The times were actually hard for this particular version, mainly because of the recent arrival of the Ford Mustang and Chevrolet’s own introduction of the Chevelle SS 396, Pontiac GTO, and the creation of the ubiquitous Camaro. As such, it’s not that common for an Impala to be a “true” SS during the 1966 model year.

Fortunately, that’s not the case with the example we see here on consignment from PC Classic Cars, a dealership located in Sherman, Texas. Instead, we’re reportedly dealing with a genuine 1966 Impala SS that looks as clean as it gets because of the white paint job with a contrasting black top. By the way, the appearance is very deceiving with this one, because there’s a lot more to it than meets the eye.

First of all, this isn’t the original color as the ‘66 was initially an “YY” Lemonwood Yellow, and the custom secrets are immediately given away by the tasty 17- and 18-inch alloys with asymmetrical front (235) and rear (285) tires. Those were optioned there for good reasons, not just for the bragging rights of the person coming from inside the 813-code black interior.

Instead, the Impala has been treated to a Dart Machinery SHP (Special High Performance) 383ci (6.3L) stroker engine, Patriot aluminum heads, Holley Terminator fuel injection, and a great exhaust setup. All the oomph is then rooted through a Tremec five-speed manual transmission and a Ford 9-inch rear end, while handling is secured by the power steering and Hydro-Boost front disc brakes.

All in all, this shapes up like a solid build, and the work was probably completed recently, as the odometer now reads just 717 miles (1,154 km). Of course, we’re dealing with a TMU here, so this should be taken into consideration when pondering if the $34,500 asking price is worthwhile. 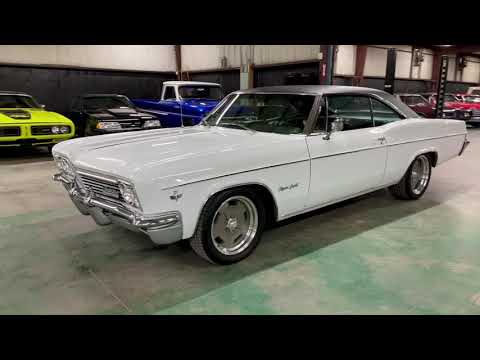