1 "Excuse Me, I Have the New Cheat Box" - VW Presentation Is Interrupted in Geneva

There are a few subjects that are guaranteed to spark up conversation at any dinner table. Take veganism, for example: everyone has a strong opinion about it, and they'll likely be very willing to share it with the rest. The same goes with circumcision.
5 photos

Some people call it child cruelty while others can't even begin to imagine doing things any other way. Whatever the case and no matter which camp you side with, the idea is that everyone should be free to voice their opinion as long as they don't infringe on anyone's rights. And since this protest was made up of two people holding a sign on the corner of a street, we doubt there were any real reasons for concern.

However, as we've mentioned earlier, people's convictions tend to be very powerful on certain subjects, and when that happens, they see everyone who disagrees as a potential threat to their way of being that they're very fond of. That's when an often disproportionate defense mechanism kicks in, and they risk doing stupid things.

Case in point, the two pickup trucks in this video right here. Even though nobody asked them, we feel we don't need to apply the old journalistic principle of hearing both sides to come to the conclusion that they don't see eye to eye with the two protestors. According to the video description, the smoke bombing you see here was just one of many - "five of six times" - that the two performed, so we guess the theory of an accident of a coincidence doesn't stand.

The worst part is that the attack wasn't very well targetted since it affected all the other pedestrians on the sidewalks, plus the two cyclists you can see there. But we wouldn't be too surprised to find out that the two pickup drivers didn't think much of pedestrians and cyclists either.

The bottom line is whatever you feel about circumcision, find a way of saying it that doesn't involve laying clouds of black smoke on those who don't feel the same as you, and everyone else around them. And since using diesel engines to spread more cancer around than legally permitted might get you sued, you might want to think of another way of making your views known. 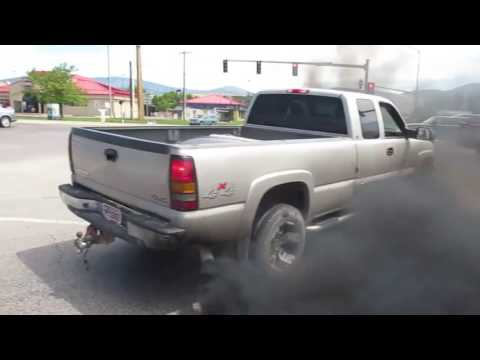