3 The Rolls-Royce Illuminated Spirit of Ecstasy Is “Light Pollution,” Illegal

5 The Stupidest Car Accessories Ever: Tuning Fail
Car video reviews:
Up Next

Occasionally, one finds himself browsing the internet for car parts and car accessories. We have all done it, and we plead guilty to wasting time and sometimes wasting money. Donut Media has gone a step further and bought car accessories that are or might be illegal, and reviewed them all.
7 photos

James Pumphrey and Jeremiah Burton ordered multiple accessories from eBay and Amazon to see how they operate and if they work as advertised. They used their VW Jetta project car for this review. Their Volkswagen Jetta is subjected to various tests that may be too rough on more valuable vehicles.

To make their video informative, and not just fun, they contacted a lawyer to advise on what would happen if someone used each reviewed accessory on the road in the United States of America. Since no lawyer they asked wanted to appear on the show, they introduced a new character to read out what the lawyers they contacted would say about the reviewed items.

As Donut Media notes in their video, the opinions sourced from lawyers are not presented as legal advice, so do not rely on information to guide your decisions. At this point, we would like to underline the fact that James and Jeremiah tested those accessories in their employer's parking lot, far from public roads, which is the safe and smart thing to do.

Some accessories reviewed in the video are illegal in most (if not all) countries on the Globe, while some might not be illegal everywhere (though not necessarily legal somewhere). However, if you are considering buying one of the items featured in the video below, we suggest that you resist the temptation, just to be safe and to save your money.

For example, the license plate flip device shown in the top photo of this story will get you in trouble with law enforcement in just about any country on the globe. It could lead to a hefty fine or even a jail sentence, so do not install anything like it on your vehicle.

While some of the accessories that have been reviewed appear to work, using them on public roads can lead to an unwanted situation for whoever has them fitted to their car. So, you know, just do not do it and stay safe on public roads. Feel free to enjoy the video, though. 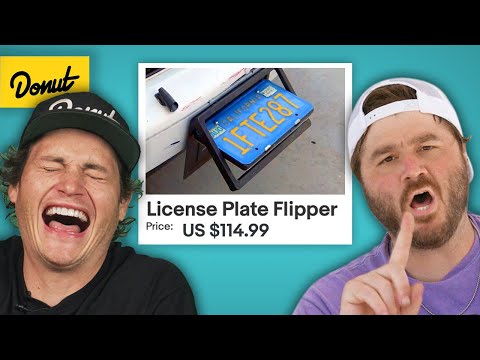