Maluma Displays Interior of His Ferrari 488 Spider, Has the Cutest Passenger, His Dog

Whenever I have to attend various social events without knowing anyone there, there's one thing that is bound to keep me from getting bored. Finding someone who's at least partially into cars can turn into a lifesaver. It's even better if they're as obsessed with anything on 4 wheels, as I am. But finding a fellow rotor head is priceless!

What Rotary Dreams Are Made of: Story of a Single-Turbo FD RX-7

Back when I got my FC Turbo II, I was the only RX-7 driver in my hometown. Of course, I've heard numerous suggestions like: "You should have gotten a BMW, or a Supra instead". But I knew I wanted a turbo rotary from the moment I started browsing the classifieds. I decided on doing a compression test for my engine, and that's how I met Mike Dendyuk. When we first met, he had already been considering getting into the rotary game. The idea had first crept into his mind circa 2012!You are never too old to set another goal or to dream a new dream
I guess seeing and hearing the FC was all he needed to make a move. Just two more weeks after our encounter, he was already actively searching for an RX-7 of his own. But he wanted an FD and one that would not require much tinkering for that matter. He found a pristine-looking, 1992 model, some 1,553 miles (2,500 km) away from our hometown. The car already had a bunch of basic upgrades, and it seemed to be the perfect choice for him.

His FD cost almost three times as much as my car did, and that would only be the beginning. The 13B-REW engine had been rebuilt just 8,000 miles (12,874 km) before the moment of purchase. The car had been dyno tuned to 318 horsepower and 295 lb-ft (400 Nm) of torque, using an Apexi Power FC. On the outside, the car was still rather stock, except for the Ultralite GT2 rims. It came on Michelin tires, but those were quickly replaced by a set of Yokohama Advan AD08R semi-slicks.

These work great during summer days, on dry tarmac. But the car can seem a bit wild if it's raining outside, and you'll be countersteering a lot if you've got a heavy right foot. Mike's FD initially had a Nissan Skyline R32 GT-R fuel pump, but that was also replaced by a more capable Walbro unit. One thing's for sure, you can't just get an RX-7 and go by without performing any upgrades. There is always room for improvement
The seemingly flawless machine started showing signs of wear and tear as Mike drove it around town. The brakes, suspension, and clutch were all faulty and needed replacing or upgrading. On a particular spring evening, he called me and asked if I'd like to take the car to a local Mazda meeting. I honestly couldn't believe that was happening to me, as I had been dreaming about that moment for more than a decade.
Still to this day, that was one of the best nights of my life. The Kakimoto cat-back exhaust felt deafening and the acceleration was visceral, to say the least. And the car felt so amazingly controllable, even when going sideways. But that night quickly became a disaster, as I went overboard with my driving, and snapped the FD's diff. About two months later he managed to bring in a replacement from Japan.

And that's one thing about RX-7s you should consider before buying one. You might have to order parts from Japan quite often, as certain replacements are difficult to come by. And ever since Mike got his car, not a month goes by without a new upgrade. The car became even more savage as he fitted an HKS downpipe and mid-pipe. Whenever he's in an underground parking lot, every single alarm will go off, so occasionally he makes use of a silencer as well.The climb is tough, but the view from the top is worth it
His passion for the Japanese brand kept growing, and he added two more cars to his garage: a Mazda 2 and a Mazda 5. The list of upgrades on the 7 also kept getting longer and I'll just point out some of the basics: a kit of SuperPro polyurethane bushings from Australia, a kit of uni-ball bushings from J-Auto in the USA, a Mishimoto thermostat, AEM smart ignition coils, an AEM AFR gauge, and it doesn't stop there.

But Mike's plan was clear all along. Although there are several benefits to having a twin-turbo RX-7, he wasn't going to stop at 320 horsepower. The moment I found out what his master plan was, I started shivering with excitement. For years and years, I had been drooling over FEED's monster of a single-turbo FD, and now my fellow rotor head buddy was about to go down the same route.

We managed to come across a massive Borg Warner EFR 8374 turbo, which had been used on a drift car before. Mike quickly called the guy and bought it from him, and that's where phase 2 of his project kicked off. Believe it or not, he performed the single-turbo conversion in an underground parking lot, by himself, with a limited set of tools and almost no prior experience in this kind of an operation.

He went down the same ECU route as I did, using an Adaptronic M2000 unit, 4 Bosch 1,650cc injectors, a Turbosmart fuel pressure regulator, a 525 LPH Walbro Hellcat fuel pump, and a lot of other parts required for the conversion. He even did all the wiring from scratch, as he had previously done for my FC. All in all, it took him several months to get it done. Right now, we've done several tests with the new turbo, but it's not over yet.

The way the car feels right now, even while running at about 0.5 bars of boost, is hard to describe in words. The turbo almost sounds like an HKS T51R, and by the time the car gets dyno-tuned, with the help of Xeno, the FD should be up to about 450 horsepower. And if you've ever experienced a rotary car before, you'll understand how impressive that is, especially for a car that's meant to be driven on public roads and not at the racetrack. 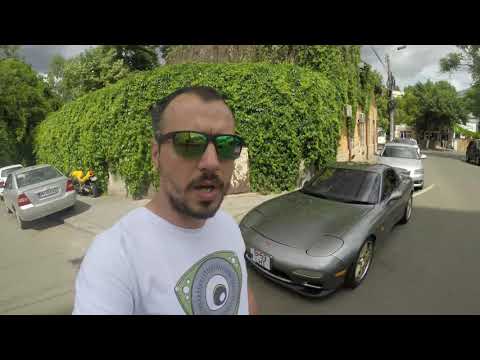