What Looks Like a Giant Bumblebee, Can Fly Anywhere, and Started Out as a Car?

Air taxis have become a buzzword for quite a while now, but Personal Aerial Vehicles (PAVs) are even more exciting, if you ask us. The freedom to fly by yourself, without needing a pilot license, on an aircraft that’s easy to operate and doesn’t harm the environment – what more could you want?
9 photos

We’re not going to get into the “which is the first eVTOL to do this or that” thing, because there are several companies creating these types of air vehicles at the moment, in various stages of development. Aptly-named Blackfly, this particular eVTOL is not one of the newest, but certainly one of the most impressive ones. It has come a long way and recently had its first public manned eVTOL demonstration flight, at the EAA (Experimental Aircraft Association) AirVenture 2021.

This is one of those successful endeavors that start out as a DIY project in your own yard, to then blow up and become world-famous. Marcus Leng, current CEO of Opener, developed his flying car prototype 10 years ago, and tested it in his own yard. Soon enough, he moved to California and started seriously developing the Blackfly.

By 2018, the Blackfly v2 had conducted its first manned flight and, one year later, Leng was awarded the EAA August Raspet Award for his contribution to the advancement of light-aircraft design.

This PAV eVTOL is classified as an ultralight aircraft in the U.S., meaning it’s a recreational sport vehicle that doesn’t require a pilot’s license. It’s a little over 13 feet long and wide, with a distinctive design that does resemble a flying car. The joystick and fly-by-wire electrical controls make it easy to operate. For safety reasons, it features a return-to-home button, as well as a ballistic parachute.

Another great thing about the Blackfly is its flexibility – not only is it amphibious, but it can land on various types of surfaces, including snow and ice, which makes it a good recreational option all throughout the year. It requires less energy than an electric car and it charges up to 80% in less than half of hour.

Depending also on how much it will end up selling for, the Blackfly could become a real hit with outdoor enthusiasts. 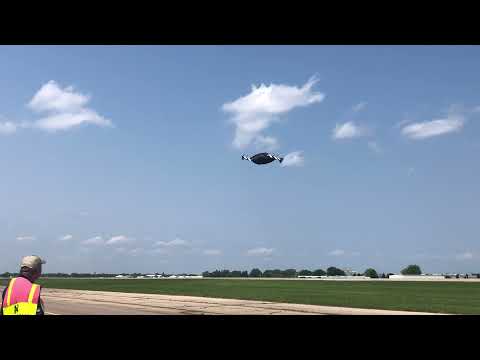