5 Thieves in Wheelchairs Tracked Down in Snow
Car video reviews:
Up Next

What Choices Wheelchair-Bound Petrolheads Have

Almost one in five Americans suffers from a physical or cognitive disability. The estimated 54 million people affected are from all walks of life, from famous Hollywood stars to small town military heroes. They say life should not stop people from moving on no matter how bad it hits them. Here are a few ideas about how wheelchair-bound petrolheads could continue chasing their dream.
10 photos

As opposed to other countries, the U.S. has been investing significantly in making both public and personal transportation accessible. Millions of Americans use a wheelchair or a walking aid, which, of course, means that getting around can take a lot more effort than it regularly does. Statistics show that there are positive trends, though. For instance, in 2007, some 98 percent of transit buses were equipped with ramps - up from just 62 percent in 1995.

Nevertheless, the social system still lacks a broad range of services the government should supply (even though the U.S. is a developed country that has the world’s largest national economy by nominal and real GDP, 49 million Americans struggle to put food on the table). Luckily, there are several programs, nongovernmental agencies, and several charities that are trying to bring a change to those who have suffered accidents.

The question remains valid: what choice does a driver who is passionate about all things mechanic has if he or she is left without the ability to walk? Mobility Vehicles
Not to sound dull, but people should know that a number of carmakers provide special models for those with serious mobility issues. Online car retailer Edmunds claims that the Toyota Avalon has long been a favorite among mobility-challenged drivers. Another candidate could be the Scion xB, which can be equipped with a rear-deploying ramp that makes entry and exit a breeze even in tight parking spaces.

As mentioned above, up to some point, any vehicle can be customized to fill the needs of a wheelchair user, but some models are designed for that purpose from the beginning. It’s the case with the VPG MV-1, a vehicle that has been built from the ground up with mobility-challenged drivers in mind. Aside other amenities, the anti-slip flooring and a ramp for easy access should be mentioned.

The list can continue with many other examples such as the Toyota Sienna, Mercedes-Benz Sprinter, Ford Transit Connect, or Ram ProMaster and Ram ProMaster City commercial vans. However, the journey you are currently taking is not about regular cars that can, up to some point, offer an option to wheelchair-bound people. It’s about ways to keep the passion for burned rubber and the smell of burned gasoline alive, even if one is bound to physical limitations. Petrolhead fun
For those who think that driving was always about more than just getting from point A to point B, the discussion truly starts here. It's about having fun, enjoying life even if it gave you lemons.

A good example for the cause could be the Tomahawk, a tracked personal mobility vehicle weighing 172 kg (380 lbs). It looks like a war machine because it was inspired by one. The owner of the manufacturer, Rocket Mobility, discovered how hard it was for a person with a disability to get around when he saw his grandfather use a prosthetic leg after stepping on a land mine in WW II.

It packs two 12V batteries that power two separate 6.2 hp (4.8 kW) electric motors, which in turn are working the treads on each side. It’s an all-terrain wheelchair that can reach up to 10 km/h (6 mph). The Tomahawk is the cousin of another beast that truly works like a tank.

Designed by the same military engineers, brothers Howe & Howe, it's built on their patented Ripsaw tracked platform, only that it was optimized for use by wheelchair-bound people. It combines power, durability, and maneuverability into a sturdy, easy-to-control and understandable platform.

The user just backs into the Ripchair using their own wheelchair that can then be locked into place, allowing the driver the option of exiting the vehicle to have a quiet lunch by the riverside or on a mountain top. Built on a lightweight tubular design and powered by a 27 horsepower gasoline engine, it’s controlled by a hydrostatic drive with electric controls. EV for wheelchair-bound drivers
A while ago, the industry was talking about a Hungarian-designed electric vehicle created to fit one person in a wheelchair inside. Dubbed Kenguru, it has a fiberglass body shell, a 16.5 kW front-wheel-drive motor producing 400 ft-lb (540 Nm) of torque. Its lithium-ion battery has a 50 mile (80 km) range and propels the vehicle to a speed of up to 25 mph (40 km/h). The American-Hungarian company claims its first production car should hit the market in the second quarter of 2016, as preorders are currently accepted with a starting price of $24,995.

Those who enjoy the wind hitting their faces can always opt for contraptions such as the HDX3-Mobility, which is a machine based on the Piaggio Liberty scooter designed for those confined to wheelchairs. The standard offer is based on a 151cc SOHC engine that can produce 12 hp at 7,760 rpm and 12Nm (8.8 lb-ft) of torque at 6,500 revs. The HDX3-Mobility has two electric motors driving the reverse and the ramp. 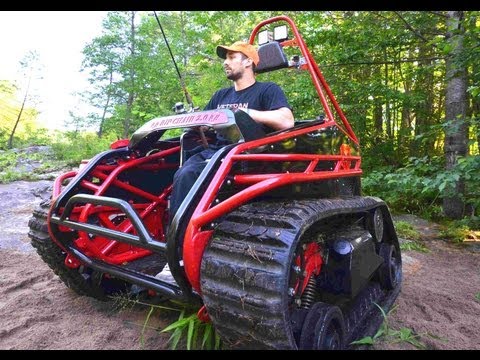