While CarPlay itself is a cool tool that it’s nice to have when driving, pretty much because of the navigation and music apps that it comes with, nothing compares to the full iOS experience.
6 photos

And of course, because of Apple’s walled garden, having iOS running on your car’s dashboard screen isn’t really the easiest thing to do, unless you find a method to install an iPad in the car one way or another.

And this is exactly that the engineers over at Soundman Car Audio managed to do as part of a custom project for one of their customers.

So what they did was to modify the 2016 Ford Mustang dashboard in such a way that an iPad Mini could be installed in the center console for the uncompromised iOS experience that we mentioned earlier.

“Today I wanted to put out this quick video to show off the finished Mustang dash mod that I've been working on for the past few weeks. This panel is for the guys at Dominator Motorsports. They are building a 1962 Ford Fairlane that is being retrofitted with a 2016 mustang dashboard,” they say.

The main benefit of having an iPad installed on your car’s dashboard is obviously related to the apps that you can run on the screen. As you probably know already, CarPlay comes with a set of limitations of its own, as only apps that are optimized for this system can be mirrored from your iPhone to the car screen.

This is no longer the case if you use an iPad, as any iOS app that supports the device can be installed from the App Store, including the ones that you really shouldn’t use behind the wheel.

Of course, you can do this at home as well if you want to install an iPad on your dashboard, but certain modifications could be required, depending on the car model and console design, including relocating some buttons. 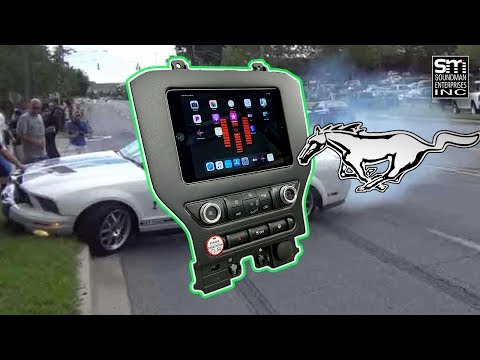