2 Is Soccer More Exciting Than a Nissan GT-R?

5 If Iceland Made Cars, They Would Be Cooler Than Ferraris and Porsches
Up Next

What Are Soccer Players Driving These Days? Ronaldo, Messi, and Neymar Included

Some football players earn more in a day than a lot of people do during an entire year, so having all that money on their hands does beg the question: what do they do with it?

Store it safely in an off-shore account is probably the right answer for the majority of those sums because no matter how hard you train, how well you eat, and how much care you take of your body, it's still going to fail you at some point. You'll be forced to hang your boots, as they say, and start doing something else.

The greater names in the sport don't have to worry too much about their future. They can become managers, which means they can continue to earn ridiculous amounts of money, TV commentators and pundits, or they might be selected as brand ambassadors by the clubs they've played for their entire lives. Some might even choose to relax and spend the money they had earned so far.

But before that moment happens, they need to live up to the expectations and enjoy the lavish lifestyle everyone associates with these top-payed athletes. And while they might all have multi-million dollar homes, nothing says "I've made it" better than a flashy car.

This list is put together by Billy and Jezza, two of the best-known freestyle footballers out there and the guys behind the successful F2Freestylers YouTube channel. They drive pretty nice cars themselves - an Audi R8 and a Mercedes-Benz G-Class - but they're nothing compared to what lies in the garages of the most famous footballers from the European leagues.

Sit back and watch a real parade of supercars, hypercars, luxury mobiles, and, on the odd occasion, lame hatchbacks (such as Paul Pogba's Mercedes-Benz GLA or Andres Iniesta's Nissan Pulsar) or American muscle cars. Aren't you sorry you didn't try harder during that soccer training?

We're not going to say who has the best collection, but if we're talking individual cars, it has to be Zlatan Ibrahimovic, Manchester United's Swedish striker that's currently out with an injury that takes the top spot. Sure, Cristiano Ronaldo's Bugatti Chiron is great - luxurious, exclusive, and fast - but it just doesn't say "car guy" as much as a Ferrari Enzo. 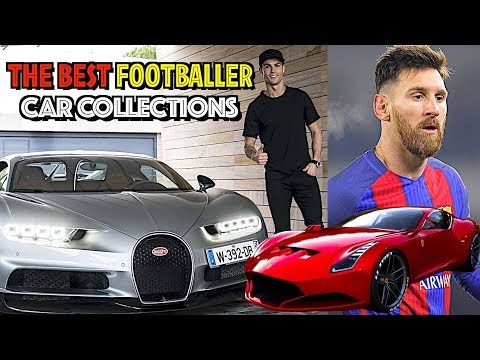