Perseverance Had to Survive 2,550 Degrees Fahrenheit Heat Going Down to Mars

Anyone curious to see what a “quick refresh” means in West Coast Customs customization parlance should look no further than the shop's latest YT video. It describes the process of taking a one of one Mansory Bugatti Veyron to “a whole new level.” And it's doing it with an interesting Audi twist.
50 photos

Everyone’s got their eyes on the Bugatti Chiron right now, as the hypercar just crossed the 300-unit mark and still has another 200 examples to go before finding a fitting place on the top shelf of high-end automotive history.

But let’s remember for a second that its predecessor, the Veyron EB 16.4, was even more exotic, with just 450 examples produced over a decade. Even better, some units enjoyed total collector status as they were labeled “one of one” creations thanks to special interventions.

One such case is the “Linea Vivere” Mansory Veyron that recently embarked on a stunning journey inside the West Coast Customs garage. Although created by the controversial German tuner, we dare say this altered Veyron was one of Mansory’s most restrained creations, as its main attraction was the exposed carbon fiber attire (rather than styling exaggerations).

But it seems that wasn’t enough for the owner who reached out to WCC for a refurbishment. It all started with the Veyron being stripped down to its bear necessities from the 1:40 mark when the body elements were all disassembled.

That allowed for the sanding of the carbon fiber (now sporting a satin clear coat instead of glossy) and the repaint of the rest of the parts in a Nardo Gray (cue the Audi twist) color. Meanwhile, the blue calipers are there to compliment the interior that was completely changed from its original white and black combination to a Bugatti-fitting blue (from the 2:45 mark).

After final assembly (starting at the 4-minute mark), we see the result of WCC’s almost total reconstruction of this prized Veyron. We also find out the aftermarket wheels are also gone, replaced by the original Bugatti set that now comes with hubs in the same Chiron-inspired blue shade. All in all, although some will argue that modifying a Bugatti is total car blasphemy, we say the transformation is for the better. 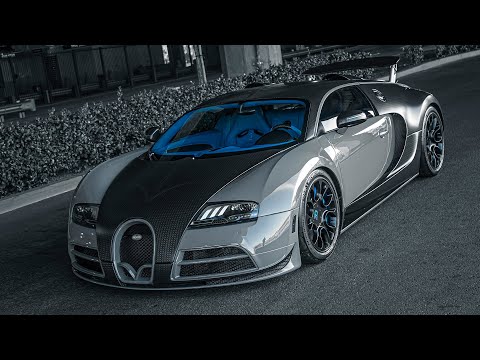