The guys from The Fast Lane Car are known for making the weirdest comparison tests. This time they compared a full-on SUV with a small convertible just for mileage purposes.
1 photo
We get the idea behind the test but maybe two other cars might've been better for their endeavor. Maybe two from the same class, or even maybe two with similar sized engines.

They took a 2013 Lexus RX 450h SUV and pitted it against a 2008 MINI Cooper S Convertible in order to see which is more fuel efficient.  Well, overlooking the 5 year age difference and technology gap between the cars, the MINI actually did pretty good.

The Lexus came prepared with a 3.5-liter V6 hybrid  engine with 295 HP and a lot of electronic system to help it reduce the fuel consumption as much as possible. The MINI on the other hand, came with the 2008 technology and its 1.6-liter turbocharged engine that develops 181 HP, hooked up to a manual 6-speed transmission.

Check out the full coverage in the video below. 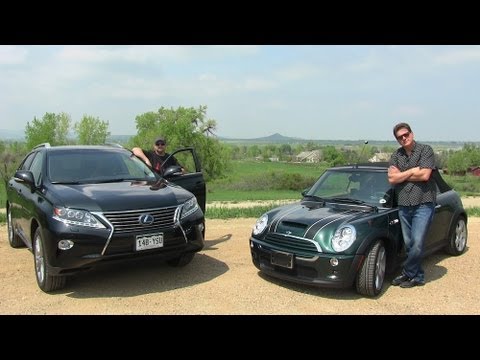