1 One-Owner 1967 Mercury Cougar Spent Years in a Garage, Under a Cover, And in a Barn

4 148-Mile 2003 Mercury Marauder Is Up for Grabs, It's Done Very Little Marauding

5 The World's Rarest Mercury Comet Is a Lightweight Quarter-Mile Beast
Car video reviews:
Up Next

Not sure how many of you out there are into musicals, but I’m willing to bet that even if you’re not, the name Grease rings a bell or two. Bells that probably have to do with its great songs or young and fit John Travolta and Olivia Newton-John and less to do with cars, but bells nonetheless.
20 photos

In a nutshell, Grease is all about the love story between high-schoolers Danny (Travolta) and Sandy (Newton-John). As usually is the case when it comes to teenage love, their story is not a simple one, and as usual when it comes to movies about teenagers, it also involves cars.

Being a movie made in the late 1970s, that recounts a tale from two decades earlier, the movie allowed for a great deal of extraordinary cars to make it into the story. And we’ve got anything from Studebakers to Fords in there.

One particularly appealing apparition was a 1949 Mercury customized by Eddie Paul, a name famous for having been responsible for vehicles used in other high-profile stories, including The Dukes of Hazzard and Gone in 60 Seconds.

In the rom-com flick, the Mercury was known as Hell's Chariot, and belonged to Danny’s rival and Scorpions leader Craterface (played by Dennis Stewart), and it is one of the easiest-to-remember vehicles featured there.

For one reason or another, the Mercury just surfaced as being up for grabs, as it is listed for sale during the Mecum auction set to take place in Monterey in August.

The black-on-black machine (with flames, of course, and Scorpions stickers slapped on the doors) started out life as a hardtop coupe, but was transformed into a convertible for the flick. It comes with a 255ci (4.2-liter) engine under the hood and a 3-speed manual transmission to go with it, but we’re not told if they’re in working order.

Modifications made to it include the fitting of Firestone Wide Oval tires, a 1950s Mercury front grille, and, most importantly, weaponized hubcaps.

That’s right, in the movie the car had hubcaps for weapons, just like the scythed chariots of old used to have. With them, Craterface shredded the side Danny ride during one of the race scenes in the movies (check video attached below for details).

As clearly visible from the photos, the hubcaps are still present on the car being sold, so it’s safe to assume whoever gets the Mercury gets those caps as well. They’ll also get a “notarized letter signed by Eddie Paul identifying this car as the Hell's Chariot built for Paramount Studios and used in Grease,” and an autograph from Olivia Newton-John and director Randal Kleiser slapped on the dashboard.

The car seems to be listed with reserve, but we’re not told how much that is. 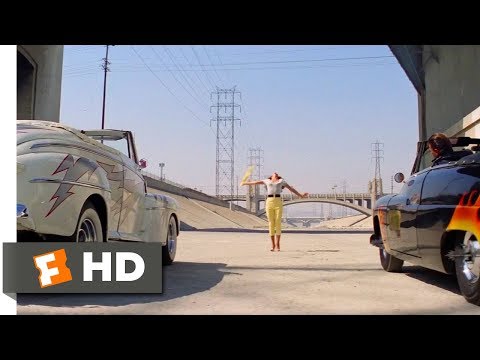