We Have All Thought about It, Now Somebody Has Actually Gone and Done It

Home > News > U-turn
Vlad Mitrache
Ever since the Model X design was unveiled, a lot of use started with the comparisons from the animal kingdom. But even though that's a bit unfair as the same could be said about other SUVs as well, it was probably down to the fact that people expected to see some of the more streamlined shapes of the Model S reflected in the new vehicle as well.
1 photo
The Model X is a porky SUV, but that's only because it was designed to offer seating for seven from the beginning. That meant the rear had to have a certain shape so those occupying the third row of seats could keep their heads up.

The electric powertrain also allows the front seats to be pushed further forward, so a more minivan-look was employed. All-in-all, it's fair to say the Model X looks nothing like the kind of performance its top-of-the-line specification can pull off.

While there wasn't a general consensus on what type of animal the Tesla Model X resembled the most, it was mostly down to a few options: a hippopotamus, a cow, an elephant or, for those who felt a little aggression was in order, a boar. Personally, we'd go with the latter, but we have to agree that the work put in by the guys at Grass Fed Coffee was pretty darn good as well.

The company that makes the world's first ready to drink butter coffee didn't just wrap the car in a cow pattern, it made a whole story around it. The Model X is now powered by "762 cowpower," while on the back it says that "Grass Fed Coffee tastes ludicrously good."

Grass Fed Coffee's Co-Founder, John Ban, explained the choice in a statement quoted by Electrek: “With the launch of both of these highly anticipated and innovative products, we thought this would be a great marriage to get our brand out there. The Model X is already a head turner, but adding our Grass Fed Butter branding to it, we really hope to grab people’s attention.” Well, if this fails to turn every head on the street (which we doubt), then there's always the option to stick a pair of large ears and a trunk and make it an elephant.

Watch the cow transformation process below. All the Model X needed was a wrap, as Tesla's designers took care of the rest. 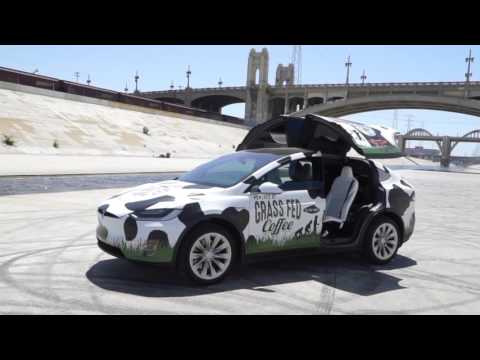