5 Drag Race: 1963 Supercharged Studebaker Avanti Is Too Fast for 1969 Pontiac GTO
Car video reviews:
Up Next

When it was released in 1962, the Avanti was an innovative and luxurious four-seater with a unique styling that made Italian designers of the era stand up and applaud. It was also ridiculously fast for its time, breaking no less than 29 speed records at the Bonneville Salt Flats.

Way Ahead of Its Time, the Studebaker Avanti Was the Fastest American Coupe of the 1960s

In the 1960s, several independent U.S. carmakers were lurking in the shadows of Detroit’s giant corporations. One of them was Studebaker, a company based in South Bend, Indiana that had been around since 1852. After a largely unsuccessful merger with the Packard Motor Car Company in 1954, it was now in serious financial trouble and needed a miracle to survive.

That miracle came in the shape of the Avanti, a high-performance luxury four-seater with a breathtaking design. The idea behind it came from Studebaker president Sherwood H. Egbert who hoped it would outsell the Ford Thunderbird. He was so confident about its potential, that he focused all the company’s remaining resources on the new car’s development.

The man appointed to design it was Raymond Loewy, a legendary industrial designer who made a name for himself reshaping the railroad industry. With the help of Bob Andrews, Tom Kellogg, and John Ebstein, an unusual clay scale model with two different sides was ready in eight days. On one side, the car was a two-seat sports coupe while on the other, it was a four-seat grand tourer. Loewy eventually went for the four-seat design as he believed it was more in tune with the market requirements of the day.

The next step of the development process was building the actual car. With no funds to build a new chassis from scratch, the team took the X-frame of a Lark convertible and extensively modified it using existing parts. The suspension received the heavy-duty coil springs from the Lark police car while the five-leaf semi-elliptics came from the station wagon. The anti-roll bar was stiffened at the front end and disc brakes were added, a first for an American-built car.

To create the exquisite body, more than 100 fiberglass panels were used which worked wonders for the overall weight. Furthermore, the Avanti was one of the first cars to employ a bottom breather design, a feature that became more common two decades later. Air was diverted to the engine bay from under the vehicle, rather than through a conventional front grille.

The cabin also benefitted from unprecedented attention to detail with safety and comfort in mind. A roll bar was integrated into the roof design, the dashboard was padded, a center console was fitted, and the overall designed oozed luxury with premium materials being utilized.

When it was unveiled at the 1962 New York International Auto Show, Studebaker announced that customers would be able to choose from three of the company’s most powerful V8s. The base model called R1 got a four-barrel carbureted 289 cu in (4.7 liters) unit that made 240 hp. Next up was the R2 which came with a Paxton supercharger that boosted output to 290 hp. Finally, the cream of the crop was the limited-production R3 that was capable of close to 400 hp thanks to its high-performance 304.5-cu. in. (5-liter) Paxton-supercharged masterpiece.

All models came with a four-speed manual, with only the R1 available with a three-speed automatic. Additionally, a Studebaker Twin Traction limited-slip rear differential was also available.

In terms of performance, the R1 could reach 60 mph (97 kph) in 9.5 seconds with the supercharged R2 being 2 seconds quicker, which made it a lot faster than any Thunderbird but still slower than the 327-powered Corvette C1. The official figure for the R3 is not available but we’re guessing it stood around the 6-second mark.

To promote the car, the company took an R3 to the Bonneville Salt Flats where Andy Granatelli broke no less than 29 U.S. speed records. He also reached an astonishing top speed of 170.78 mph (274.84 kph). Even if wasn't the quickest from 0 to 60 mph (97 kph), this feat made it the fastest American coupe of the 1960s. However, no independent tests were ever done and partially because of the R3s low production numbers, the record was never officially recognized.

Unfortunately, the Avanti never became the miracle envisioned by Egbert as sale figures were disappointing. Plagued by manufacturing issues, particularly with the quality and volume of the fiberglass panels produced by Molded Fiberglass Body in Ohio, the car only managed to prolong the unavoidable demise of Studebaker by a few years. In total, about 4,500 units were built until production ceased in December 1963, with only a handful of them being high-performance R3s.

Despite this, it remains one of the most intriguing cars born in the U.S. during the 1960s, standing out from the crowd thanks to its stylish design and abundance of innovations. You can admire it and enjoy the rumble of its awesome V8 in the YouTube video below posted by Powers Motorsports. 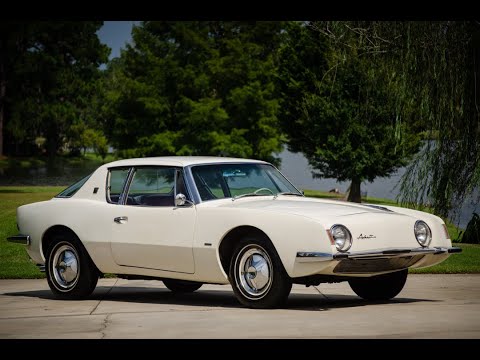