2 Droneboarding Might Become a Thing, but Not before This Kid Has Kids of His Own

3 This Drone Will Drop into Water and Sink on Purpose

4 This Norwegian Composite Drone Is the New Weightlifting World Champion

Cyclists Hit an Invisible Wall, the Wind Hilariously Stops Them in Their Tracks

Vlad Mitrache
All it took was for two drone operators to get a little competitive and what could very well be one of the sports of the future was created: drone racing, a smaller but faster version of the aerial-acrobatics competitions (aerobatics) we’re used to.
1 photo
Previously, footage like what you’re about to see couldn’t be achieved other than by creating a 3D model of the warehouse, rendering all the textures and then having the camera float around at high speed. Anyone who’s ever played the ‘90s hit video game Descent will know exactly what I’m talking about.

But now we have drones. Just like cars, they were built for a different reason, and not to race them. But similar to cars, once people got bored of using them the way they were meant to be used, they started having a lot more fun. So much fun, in fact, that they began modifying the vehicles to get more out of them.

The next step was to develop cars that were specifically designed for competitions, something it took drones just a few years. These nimble flying mosquitos are smaller than your usual UAV, but instead have a pretty big antenna. That’s because they need to relay the images captured by their front camera instantly to the operator, or the well-known lag would have a much more serious effect than it does in online gaming.

We’ve previously seen footage of drones flying through courses built over fields or even a stadium, but this one is by far the best so far. The best thing about drone racing is the limitless shapes a track can have, as well as the fact that it can play with the three available dimensions a lot more than any other sport.

Racing around the boxes inside a warehouse is great fun, but the outdoors bits are just as captivating. A few seconds into the clip and you’re already rooting for the drone you’re watching. You want it to catch the one in front. It’s your drone, now, after all.

We’re not going to spoil it for you by revealing what happens at the end, but it’s worth watching. And try to keep in mind at all times that there is somebody seeing the same things you’re seeing through a pair of video goggles, only they actually guide the drone around. That’s like having the reflexes of a mosquito. 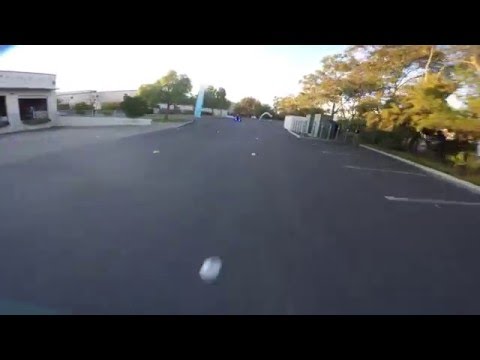