2 Man Falls Asleep while Cruising on Autopilot - Is He an Idiot, or a Pioneer?

3 Tesla Autopilot Misfires, Model S Crashes into Car at Speed on the I-5

The thing with placing yourself on a too high pedestal is that if you happen to fall, you'll have a long way to go until you hit the ground, long enough to meditate on whether a more moderate approach towards singing your praises wouldn't have been better.
1 photo
You won't hear Elon Musk bothering himself with thoughts like these, though. He insists that the Autopilot is the best semi-autonomous system out there, and until other manufacturers place as many cars on the roads with a similar feature, there is no way anybody could contradict him. However, the number of videos in which the system fails is starting to grow, so maybe there is still some work - a little tweaking, perhaps - to do.

On the other hand, Tesla has just released yesterday the number of miles driven by its cars on public roads with the Autopilot active, and it's a lot. 100 million miles, to be more precise, not counting the 780 million the cars drove with the hardware installed before the update enabled the use of Autopilot. To put that into perspective, Tesla is currently gathering more autonomous miles in a day than Google has during its whole project that started in 2009.

That's why counting the crashes where AP is involved isn't relevant unless it's put into the context of the million miles that go by without any incident. But that doesn't make it any less amusing when it happens.

We've had plenty of examples where the Autopilot saved the day, but now the times it didn't are starting to pile up as well. Until now, Tesla has denied responsibility and blamed it on the driver's wrongful operation of the feature. Have a look at this video and try to imagine what its excuse will be this time (don't worry, there is one).

It all happens on a busy two-lane highway in Switzerland, if the CH sticker on the van is anything to go by. The Tesla Model S is cruising with its Traffic-Aware Cruise Control mode activated when it encounters a van stopped on the left side of the lane with its hazard lights on. The car in front of the Tesla squeezes through, but the Model S seems to have a mental breakdown and just keeps on going straight, as if there was nothing there.

It gives the take-over signal, but it's much too late. The driver brakes but all he can do is reduce the severity of the impact. He ends it all with a very calm "scheisse." Now, let's see what went wrong. Well, the TACC works best when there's a car in front of it moving in the same direction - in this case, the Opel Insignia Sports Tourer.

When that car disappears, the Tesla feels like a little kid lost in the supermarket, too afraid to stop, too confused to know where it's going. So it keeps going forward, hoping it will find its mommy again.

Still, one question remains: how was it not able to spot the big-a** van taking up more than half its lane? The Tesla manual provides an answer: “Warning: Traffic-Aware Cruise Control can not detect all objects and may not brake/decelerate for stationary vehicles, especially in situations when you are driving over 50 mph (80 km/h) and a vehicle you are following moves out of your driving path and a stationary vehicle or object, bicycle, or pedestrian is in front of you instead. Always pay attention to the road ahead and stay prepared to take immediate corrective action. Depending on Traffic-Aware Cruise Control to avoid a collision can result in serious injury or death. In addition, Traffic-Aware Cruise Control may react to vehicles or objects that either do not exist or are not in the lane of travel, causing Model S to slow down unnecessarily or inappropriately.”

Of course, the driver should have taken all precautions, and he should have braked himself. However, the car wasn't traveling at over 50 mph (80 km/h), as the manual says, and even if it were, there's still the fact that IT CRASHED INTO A STATIONARY VAN, FOR GOD'S SAKE. 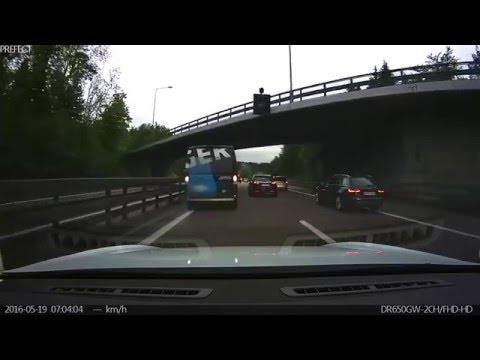