2 The GMC Hummer EV Has Outrageously Expensive Taillights, at More Than $3K Apiece

4 The Mighty GMC Hummer EV Is Fully Booked, No More Reservations Are Accepted

5 The 9,000-Pound GMC Hummer EV Can Jump and We Have the Proof
Editorial

Cristian Agatie
Being very fast and very heavy is not a good combination for a truck. Uniting these qualities with a careless driver makes for the worst idea, as YouTuber Mondi discovered the hard way. He wrecked his GMC Hummer EV after just 19 miles of driving.
8 photos

Sometimes, advertising and reality are two different things, but that doesn’t stop people from trying everything they see in commercials. One good example is people racing their Toyota GR86 only to see their warranty void after that, despite the Japanese carmaker advertising the car as a racetrack machine. This is not the only example, as we have a new (and more painful) story to tell.

This spring, GMC released a one-hour documentary about the GMC Hummer called “Revolution.” The video details interesting things about the 9,000-pound electric beast, but what caught our attention was the jump at minute 34:00.

“Trying to jump the truck, trying to get some air, really checking for our torque and safety monitors, got good data on it,” says one of the testers in the documentary. “Nothing broke, nothing’s leaking. As far as I know, all the parts are still on.”

Well, at least one GMC Hummer EV owner took that video too literally on the first day after delivery and found a different reality. YouTuber Mondi took his friends for a joyride in his brand-new Hummer EV and was almost about to leave them impressed when things went awry. He chose a sandy strip as his test track and activated the famous “Watts to Freedom” (WTF) mode to achieve maximum acceleration performance.

Things looked good, and everyone was having fun, but it took a fraction of a second for the driver to smile at the camera with a thumb-up gesture for him to lose control of the truck. The truck landed hard after a jump, destroying the radiator and the rear-wheel steering components. While he could still drive his truck in limp mode, the Hummer had to “crab-walk” all the way to the dealer.

We don’t know whether it was worth it to wreck the $110,000+ electric truck just for views and likes on YouTube. What is for sure is that he won’t get a replacement for a very long time (if any) because GMC has stopped taking orders for the truck. Mondi stressed on video that they don’t even make parts to repair the truck, although he was still smiling while saying that. 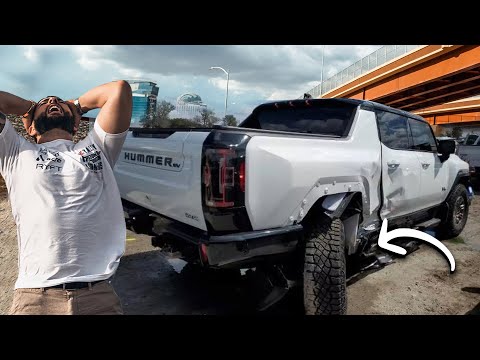