The 2021 Azerbaijan Grand Prix was arguably the most spectacular race of the year as far as Formula 1 is concerned. The excitement began on Saturday during qualifying when all three sessions had to be red-flagged after drivers kept hitting the wall.
7 photos

Eventually, the grid would form with Ferrari’s Charles Leclerc starting from pole position on Sunday, with Hamilton second and Verstappen third. The two title contenders made pretty easy work of Leclerc in the first few laps of the race before the Red Bull driver managed to undercut the reigning champion during his pit stop.

Then, on lap 31, Aston Martin’s Lance Stroll wiped out in a straight line with sudden and catastrophic rear tire failure, impacting the wall at roughly 200 mph. Thankfully he was able to walk away, seemingly unscathed. Ironically though, Stroll’s incident would repeat itself in an even more dramatic fashion with just five laps left in the race.

That’s when race leader Max Verstappen suddenly lost the rear end of his car as well, with his left rear tire giving in. We haven’t seen a potential race winner miss out on earning any points that "spectacularly" and that late in a Grand Prix in a long time. By the way, due to F1 regulations, you can only watch the clip through the official F1 YouTube channel, so just click "Watch on YouTube" after they hit you with the "video unavailable" message.

So then what happened? Well, according to Pirelli boss Mario Isola, tire wear is an unlikely culprit. He instead believes that on-track debris was to blame for both incidents.

"For Max, it could be debris from Lance’s car,” he said. “For Lance, honestly I don’t know because there were no incidents before his crash, so I cannot exclude that there was a part of something on track.”

Interestingly enough, Pirelli announced that they’d also spotted a cut in the hard tire of Lewis Hamilton’s Mercedes on the inside shoulder of the rear-left. The cut was discovered when Hamilton pitted under the red flag caused by Verstappen’s accident.

Despite his crash, Max Verstappen still leads the 2021 Driver’s Championship with 105 points, followed by Hamilton with 101. 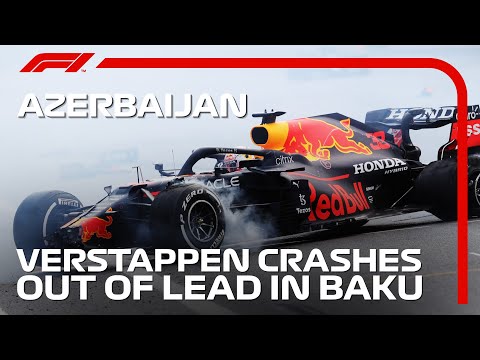