4 Forget About Wingsuit Flying, Parachute Snowmobiling Is the New Deal

Ionut Ungureanu
“I’m not playing with death; I’m playing with life,” aviation aficionado Yves Rossy, best known as Jetman, says at the beginning of this mesmerizing video shot in 4K. Images with the never ending, beautiful sand dunes of the desert then follow as a 10-minute video of great jet-pack flying adventures is about to take you on the best sightseeing tour of Dubai one can imagine.
1 photo
You know you’ve discovered something great when it makes your body thrill with emotion. However, when you hit that moment, it’s only then you know you are happy. For us, petrolheads, that moment usually involves a car, a full tank and some spare time (maybe some good music too). For Swiss Guinness record holder, Yves Rossy it's that moment when he jumps off an aircraft while wearing his patented jetpack.

We’ve seen this beautiful work of technology before. It’s a jet-propelled wing suit made of carbon fiber the Swiss pilot and aviation enthusiast has dedicated most of his life for. In 2006, he became the first man in the history of aviation to fly with it.

As you can clearly see in the video (which you are most likely watching right now, instead of reading this), the device is comprised of a backpack equipped with semi-rigid airplane-type carbon fiber wings with a span of about 2.4 meters (7.9 feet).

Power comes from four Jet-Cap P200 jet engines modified from large kerosene-fueled model aircraft motors. In figures, we’re talking about a 55-kilogram (121 lbs) suit that is capable of propelling the person wearing it to up to 200 km/h (124 mph) in the air, of course. Good. Enough with the tech stuff!

Rossy took his fellow daredevil and protege Vince Reffet in a mesmerizing adventure in which they explored the limits of Dubai. These sights imply some of the eccentric metropolis’ best highlights such as the famous Palm Islands, Burj Khalifa and a bunch of other beauties.

Hey, drifting is fun and all, but these jetpacks are something else, really! 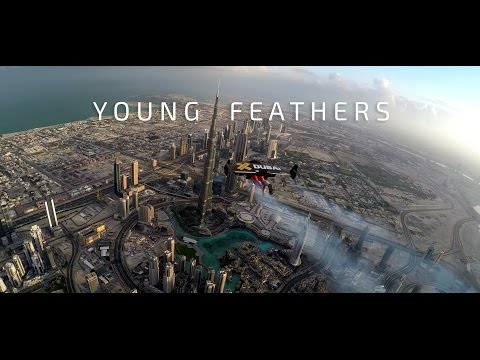