It was only a matter of time until the latest and the greatest GoPro would be put through the test in an unlikely fashion. Warped Perception has mounted the action camera inside one of the rear tires of a Supra MKIV and under the car, filming the tire flexing and the suspension at work as the car drifts to the soundtrack of turbo whoosh.
52 photos

First things first, the GoPro Hero9 has been designed with vlogging in mind. This is the reason the sensor now boasts 23.6 megapixels. The full-color LCD up front is another highlight, as is the 1,720-mAh battery that provides 30% more battery life than the Hero8. On the downside, the latest action camera is 10 percent larger than the Hero8.

Not large enough to pose a problem for Warped Perception, though. Including the 3M adhesive mount, the GoPro fits between the inside of the wheel and the tire, allowing us to admire how the rubber flexes during sideways action, sidewalls included. Eerie is arguably the perfect word to describe how a drift sounds from inside the tire.

“I did the best I could to drift as long as I could but the rear tires were pretty sticky,” said the man behind the wheel. “I also mounted a GoPro underneath the car so we can see the suspension at work while sliding into the turns and exiting.” From this location, the first things that pop into one’s eyes are the driveshaft and the CV joints of the car.

When the going gets twisty, the exhaust pipe flexes according to the forces at play and the Supra hunkers down like nobody’s business under hard acceleration. Watching the suspension and drivetrain work while drifting is – dare I say it – pretty spectacular.

From the undercarriage camera, it’s also easy to tell that the Supra is in dire need of differential bushings. New bushings help the car’s performance by keeping the rear end in place by eliminating wheel hop, improve handling, and reduce driveline losses during cornering and throttle change. 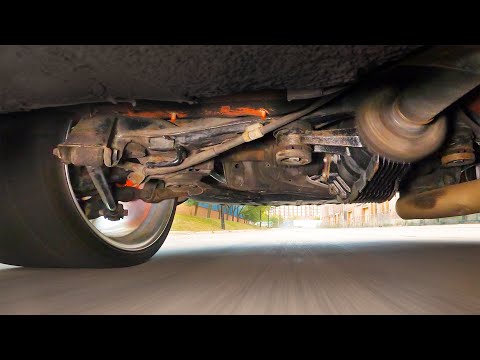