2 Akio Toyoda Denies Toyota Is Skeptical of BEVs, States It Will Offer All Options

Considering that a bone-stock McLaren Artura recorded 10.27 seconds at the Bahrain International Circuit’s drag strip, the straight-line performance of this ‘Yota simply boggles the mind. As the headline implies, the car in the featured clip isn’t your usual GR Yaris because it lays down 549 HP.

Gifted with a custom intercooler, a BMC air filter, a less restrictive exhaust system, as well as a MoTeC M142 direct injection engine control unit, the EKanoo Racing GR Yaris clocked 216.03 kilometers per hour (134.23 miles per hour) as it crossed the quarter-mile finish line. Driving a supermini at high speeds is an experience in and of itself, but taking a subcompact hatchback over 200 kph certainly isn’t for the faint of heart.

Not available stateside, the GR Yaris also happens to be a very different animal from its lesser siblings because Toyota had to rethink the entire rear end for this application. By combining the GA-B platform with GA-C goodies out back, the Japanese automaker could give this fellow GR-Four, a performance all-wheel drive system that employs an electronically-controlled clutch pack. Although similar to Haldex, the Intelligent Torque Controlled Coupling is both smaller and lighter than the Haldex clutch.

Not available in Bahrain where Ebrahim Kanoo is based, the GR Yaris is pretty expensive for a subcompact. Over in Germany, the largest new vehicle market in Europe, it kicks off at 34,000 euros (35,345 dollars). 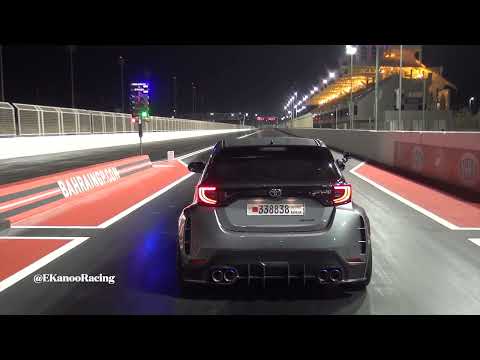