1 The Piastri and Alpine Saga Explained, Why Is No One at Fault in This Drama

3 WRC Celebrates 50 Years of Racing, We Interviewed the Senior Director of Sport

There’s a pilot, and there’s a yacht, but this is no ordinary racing, and there’s no sea in sight. Horonuku is a land yacht meant to sail on challenging salt lakes with the goal of smashing the current world record for wind-powered speed. Designed and built by the awesome Emirates Team New Zealand (ETNZ), this unusual vehicle finally got to experience a real salt surface for the first time.
9 photos

Yesterday was an exciting day for the guys at ETNZ, who took out Horonuku for its first encounter with the almighty Lake Gairdner in South Australia, chosen because it provides the flattest and fastest location of its kind in the Australasia region. This is where Glenn Ashby, a sailing champion who won three America’s Cup trophies, among many others, will attempt to break the world record.

To do that, Horonuku will have to sail faster than 126.1 mph (202.9 kph). That’s the current Wind-Powered Land Speed Record set by Richard Jenkins with his Greenbird. But one of the greatest challenges is the weather. Even for this trial, the lake had barely dried out after a long period when it was still covered with surface water. On the other hand, the wind wasn’t that strong, only about 8 knots (9 mph/14.8 kph).

At first, the craft was towed because it was more about checking out the surface. It also took a lot of work just to get it down to the lake and get its 10-meter (32.8 feet) rig up because there were no cranes and forklifts there to help. Honoruku is still a work in progress, and this first trial will contribute to making more improvements. This was just the first day in a series of testing, where various elements will become the focus, including the craft’s tires and traction.

Then, it’s only a matter of time. This particular world record is fully dependent on nature. Once the Salt Lake is in perfect condition and the winds are strong enough, Horonuku will aim for the speed crown. 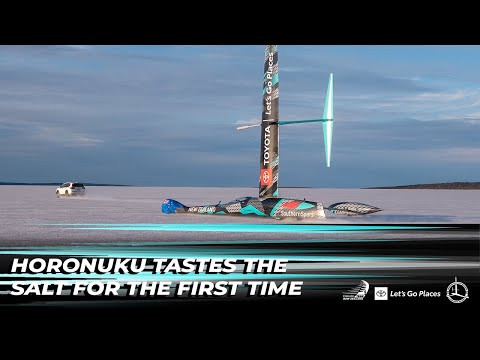