Unlike “Pride of Moray” or “Spirit of Reykjavik”, the newest submarine-hunter to join RAF’s fleet will sport a much more dramatic name, in honor of a Canadian pilot who was awarded a Victoria Cross, for his heroic actions while serving with the 201 Squadron. This is the same squadron that operates the Poseidon aircraft fleet today, so the name is even more significant.

Back in 1918, Major Barker got caught up in a vicious fight that involved 15 enemy aircraft, while he was flying a Sopwith Snipe. He succeeded in taking out three of those aircraft, before making a forced landing, despite having multiple injuries. His bravery is remembered to this day, and this new submarine-hunter will be the one to carry it even further into the future.

RAF has ordered a total of nine Poseidon aircraft from Boeing, which represent the submarine-hunter fleet based at RAF Lossiemouth. Earlier this year, the new facility was opened at this Quick Reaction Alert station in Scotland, after a $138 million (£100 million) investment.

This brand-new Poseidon fleet is an essential “defense layer” in anti-submarine warfare, together with Type 23 submarine-hunting frigates, A and T-boat hunter-killers, and Merlin Mk2 helicopters. Based on the Boeing 787-800, Poseidon is a highly versatile aircraft that can conduct surveillance operations and enemy target detection, as well as life-saving search-and-rescue missions.

This majestic patrol aircraft is equipped with advanced radars for high-resolution mapping, as well as acoustic sensor systems that enable it to search and track enemy submarines. With a maximum speed of 490 knots (907 kph), and armed with five lethal torpedoes, the Poseidon is a force to be reckoned with.

The “William Barker VC” has joined the other six Poseidon aircraft at RAF Lossiemouth, with the final two submarine-hunters in the fleet expected by the end of the year. 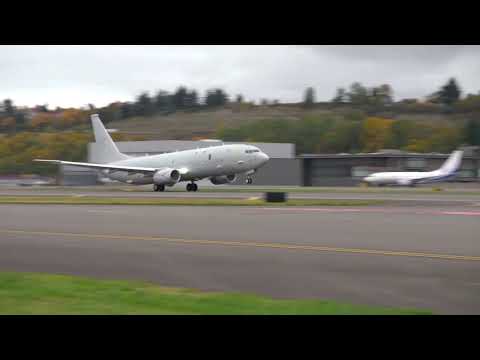