Foil technology isn’t all about flying speedboats – Infiniti Yachts has used it to design and engineer a pioneering performance sailing yacht that will set new standards for offshore racing and even revolutionize cruising models.
11 photos

Tulikettu is the name of the first Infiniti 52 model built by Infiniti Yachts, completed at the beginning of this year. “Powerful enough to create light amidst the darkest sky, and faster than the wind” – this is the poetic description of the vessel coming from those who will sail it. The Tulikettu racing team is determined to become the first Finnish sailing team in history to win one of the most challenging offshore races organized by RORC (Royal Ocean Racing Club), the new Baltic 600 Race.

Tulikettu is the first production monohull for offshore racing that was specifically designed around a foil system instead of choosing and adapting a foil to an already existing hull model. This is the Dynamic Stability System (DSS) retracting lateral foil that isn’t meant to make the boat fly but reduce drag and displacement while boosting speed.

According to the builder, this 52-foot (15.8 meters) model is large enough to sail easily for an overnight, but at the same time light enough for exhilarating speed. Another benefit of the DSS foil is that it allows the vessel to be sailed with a smaller crew, even half the number that’s typically required for a yacht this size. Tulikettu will have nine crew members on board for its first race, which will give it a significant competitive advantage, but it can also be sailed with a crew of just six.

According to the builder, Tulikettu will not only set the standards for a new racing class among the 52-foot yachts but will also most likely inspire a new generation of cruising yachts that will use foiling technology for better stability and speed. 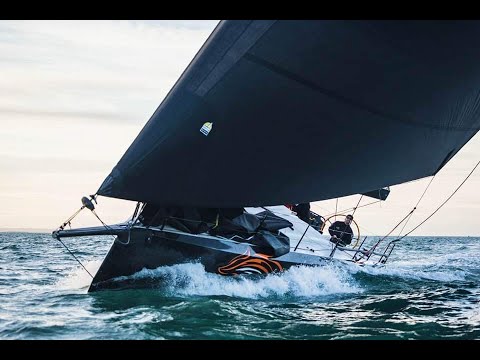