The Range Rover Velar is already a properly fast SUV in SVAutobiography Dynamic Edition spec. It’s got a 5.0-liter supercharged V8 engine that produces 542 hp (550 PS) and 500 lb-ft (678 Nm). Manhart, however, isn’t the type of company that will leave "well enough" alone, which is how the Velar SV 600 came to be.
9 photos

Thanks to its ECU remapping and custom sports exhaust system with flap control, the Manhart-tuned Velar now produces 592 hp (600 PS), to go with 553 lb-ft (750 Nm) of torque. While we don’t have an exact 0-60 time for this updated version of the Velar, we know that a stock SVAutobiography Dynamic Edition model will hit the mark in just 4.3 seconds, before maxing out at 170 mph (274 kph).

The Manhart-tuned version also gets a few styling mods to stand out even more, such as the 23-inch turbine design glossy black Hawke wheels or the decals. Meanwhile, the interior, chassis, and brakes are kept stock, although the German tuner will offer various customized solutions to customers looking for something more specific.

Now, if you were wondering what maxing this SUV out actually looks like, AutoTopNL's got us all covered with one of their usual top-speed German Autobahn runs. Towards the end of the clip, you’ll see the Velar reach a maximum speed of 184 mph (296 kph), which is considerably better than what it can do without any modifications. It’s actually a pretty good increase in top speed, considering the relatively low amount of additional horsepower.

Ultimately, the Velar SV 600 by Manhart blows past its factory top speed with incredible ease, which makes this a really competent long-distance cruiser—as long as your journey involves a speed limit-free Autobahn section, that is. At the same time, there are plenty of other tuned SUVs (most of them of German origins) capable of matching and even surpassing the SV 600, so let's be moderately impressed and call it a day. 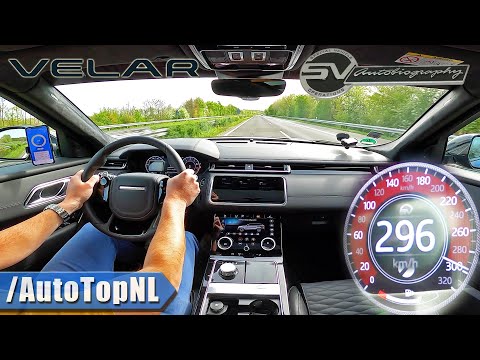