3 New Toyota GR Sedan Supposedly in the Making, Might Be the GR Camry

The fifth-generation Supra gets a lot of criticism over its BMW-sourced oily bits and underpinnings. But had it not been for the German automaker, the MKV wouldn’t be here with us today. It’s also worth noting that BMW and Toyota went on separate ways early during development, which is why the Supra feels nothing like the Z4.
15 photos

Another specific that is grossly ignored comes in the guise of the 3.0-liter engine, a straight-six turbo we all know and love from plenty of Bimmers. An extremely tunable powertrain, the B58 is known to make a few more ponies than advertised. For the 2021 model year, when the Supra received the more powerful iteration of the B58, the peeps at Car & Driver dyno’d their demo car at 388 RWHP compared to 382 crankshaft ponies.

The ZF Friedrichshafen-sourced 8HP still is the best automatic in the biz, yet some customers want a three-pedal arrangement. Lo and behold, Toyota granted their wish for the 2023 model year. The S6-53 in the Supra isn’t an off-the-shelf manual, though. It’s actually an S6-53 modified specifically for this application. Toyota’s engineers nerded over the finest of details like there’s no tomorrow, experimenting with three gear knob weights.

They settled for 200 grams or 7 ounces because this particular weight offers the right amount of inertia to the movement between gears without feeling clunky. Meanwhile, in Stuttgart, the peeps at Mercedes will bid farewell to manuals in 2023. Although yours truly is fully in with the “save the manuals” crowd, it was about time considering that Mercedes’ last manual-equipped car in the U.S. was the 2021 model year C 300.

Toyota’s painstakingly developed manual is demonstrated in the following clip by our friends at L’argus, which tracked a demo car at Circuito Monteblanco in Spain. You can tell the driver is having fun, working that gearbox in preparation for corner entry and under acceleration. 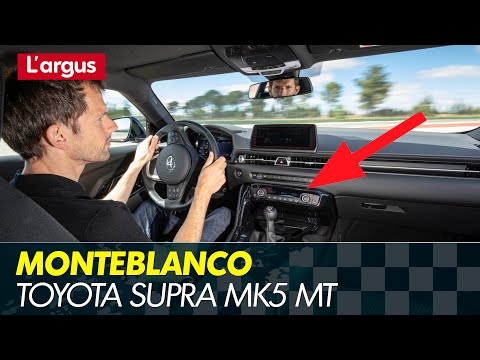