The Ford Bronco has been one of this year's major debuts - if not the most important - but if there was one thing still missing to make this reboot all the more successful, it's the SUV's Raptor version.
13 photos

We all knew it was coming from the moment Ford announced it would bring back the model and, even though it doesn't necessarily make a lot of sense from the regular buyer's perspective, and it won't constitute the bulk of the sales, it's still the one we've been waiting for.

Well, the wait isn't over yet, but it's clearly entered the final stretch ahead of the official release planned for 2022. Yes, that's a bit ambiguous as it leaves 365 open possibilities, yet it's as precise as Ford wants to be at the moment. If it makes it any better, it looks as though the SUV is ready to go, so it might be just the supply issues that are forcing the company to play it safer than everyone would like.

It doesn't take a lot of gymnastics for one's imagination to figure out what the Ford Bronco Raptor will look like with both the regular Bronco out there and the Raptor versions of the F-150 and Ranger trucks. However, seeing it with our actual eyes instead of our mind's eye still makes a big difference, which is why we're sharing this clip with you.

The folk at The Bronco Nation had shared images of the Bronco Raptor earlier this month as well as a short clip that, by the looks of it, came from the same session as this extended footage. Only now, though, we get to see the top Bronco in action doing the kind of things it was created for (even if we're pretty sure it's capable of way more extreme stuff than this).

The video gives us a pretty good look at the vehicle's design with its wider tracks, beefier wheels (37s are reported as an option, 35s as standard), massively flared arches, and just added overall badassness. Even though we also get a good listen of the engine note, it's still impossible to tell which of the two potential V6 options will make its way under the Bronco Raptor's hood: the 3.0-liter unit or the 3.5-liter one.

There's only 50 hp between them, but you still feel as though going for the lesser option would be a crime just on the basis of the 3.5-liter powerplant being available. Still, it could be even worse than the 3.0-liter 400 hp turbocharged V6 from the Explorer ST. Word is Ford also considers the possibility of upgrading the 2.7-liter already available on the Bronco to give it more power - somewhere in the region of 350 hp. There are no certainties, but by the sound of the engine, we're pretty sure it's not the 3.5-liter unit, and we'd even go as far as to back the 2.7-liter hypothesis.

Watching the Bronco Raptor tear up the dried mud course, however, you realize it's not so much the high-power output that defines the SUV as its chassis and suspension system. The Ford's body just doesn't seem to bounce with the shocks and dampers taking all the punishment as the Bronco glides over the multitude of bumps. It's going to be a massively enjoyable SUV when it comes out and quite a looker to boot. 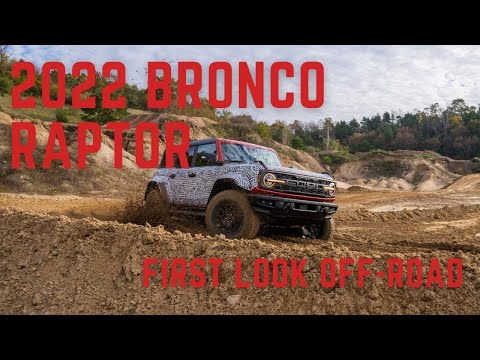