This is not the Model Y's finest hour. The electric crossover continues to sell pretty well despite the countless stories of just how supremely bad some of these vehicles are put together and, more importantly, how they're allowed to leave the factory like that, yet that series of horror tales might have just hit its apogee (hopefully) today.
1 photo
Apparently, a father-and-son duo traveling home in their brand-new Model Y after just taking delivery had the misfortune of witnessing their car turn into a convertible while going down one of the country's fine interstates. That beautiful glass roof the Model Y gets simply took off when confronted by the high-speed draft, leaving the two with way too much room to scratch their heads, something they most definitely felt like doing.

Close to two weeks ago, Tesla released a performance upgrade for the dual-motor non-Performance Model Y that boosted the car's acceleration. We didn't interpret it as a diversion back then - something to take the heat away from the troubled crossover - but it sure might seem like it now in the light of the latest events.

The guys in the video, Raj (of the Tesla Raj YouTube channel fame) and Tim, the owner of a bright-orange dual-motor Model Y, decided to test the truth about Tesla's promise and compare the performance of Tim's vehicle before and after the upgrade.

Here's a little side note before we get into what happens in the video. People keep saying that Tesla can make their cars go faster using over the air updates and, while that's true in some cases when there's a software update that goes out to every purchased vehicle, free of charge, it isn't the case with this performance boost you can unlock in the app for $2,000. This isn't Tesla making the car quicker, it's Tesla canceling a software nerf it had put in, in exchange for a certain amount of money. Two grand, in this case.

Alright, with that out of the way, the only question remaining is: does it work? And, more importantly, does it work like advertised? The quick answer is "yes". Raj and Tim's little experiment reveals that post-upgrade, the Model Y's 0-60 mph time was improved by more than 0.5 seconds (0.52, to be precise).

However, there is a slight difference between the two runs, with the first one taking place on a slightly steeper slope. We will admit to having no idea how big of an impact a 2% slope difference actually makes, but it's something the two could have easily avoided by testing the acceleration in the exact same spot. Anyway, even if it's not exactly $400 per 0.1 seconds, it's clear the $2,000 does get you better performance. 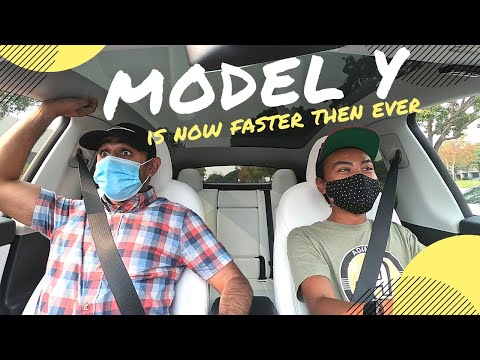