It's been five days since winter has officially started in the Northern Hemisphere, which means more and more videos involving cars and snow are going to be headed your way, one way or another.
6 photos

Depending on how you feel about the white stuff, you can either enjoy or dread the prospect. However, even if you're the kind of person who likes lying in the sun more than throwing snowballs, we like to think drifting is something universally acclaimed as a good thing. And even if you find snow to be too cold and wet for your liking, there's one thing that nobody can take away from it: it makes drifting a lot easier.

So easy that if you don't put winter tires on, you won't be able to do anything else but drift. With the right kind of rubber, though, a snow-covered road can be the perfect place to chain one drift after another as if you were playing Need for Speed Underground all over again. The only other thing you need is... a bit of skill.

The guy in the video below definitely has it. His name is Sebastian Vittel and, if that sounds familiar, there could be two explanations: one, you're mistaking him for Sebastian Vettel, the German Formula One driver who will be racing for Aston Martin next season; second, you've been watching the Tesla Model S Plaid development closely and you know he was the man driving the prototype for that record run on the Laguna Seca racetrack.

Here, you will find him in a completely different situation. For one thing, he's behind the wheel of a Tesla Model 3 Performance, but the real differentiator is where the EV is driving: a closed road in the French Alps that's completely covered in snow and ice.

Needless to say, as fun as it looks, you shouldn't try this yourself unless you're very certain about your skills and your knowledge of the vehicle. Even then, if the circumstances are identical - we mean the significant drop that Sebastian has on one side for most of the time - you might want to give it a second thought.

For more reasons than one (no Tesla, no snowy alpine road, not nearly the same skill), most of us will have to settle for watching this clip instead. And, if midway through you find yourself enjoying it but also feeling a bit tense, it's fine; both feelings are perfectly explainable. 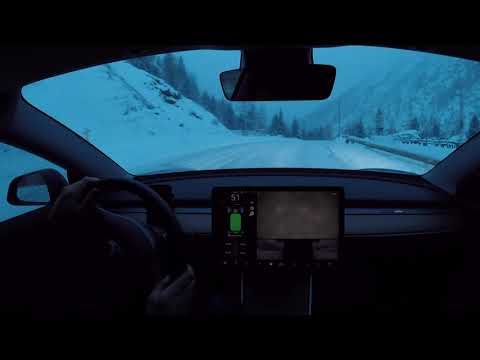