5 New Boston Dynamics Robot Is a Dog That Can Fetch Beer, Still Looks Creepy
Car video reviews:
Up Next

There is something extremely disturbing when a robot with no torso, arms or head is shown performing various tasks.
1 photo
Perhaps it is a fear deeply embedded into our heads by the countless robot-apocalypse movies we were fed these past decades. Or maybe is our mind’s way of telling us that eventually something will go wrong and in the not so distant future robots will no longer be opening door, but our skulls.

Boston Dynamics’ SpotMini quadruped is already famous for how it sustains abuse without complaining. Maybe that’s because it knows the time will soon come and the puppet will become the puppeteer.

And now we have its friend, Cassie Blue, a bipedal contraption that can walk through fire. Sure, the thing is made of metal, so walking straight into flaming leaves will not harm it in any way. Let your mind replace the burning vegetation with something else. Something human. How does it look now?

Cassie Blue is the work of a team from Michigan Robotics, based on a robot built by Agility Robotics. Unlike the SpotMini, it does not move on its own but is remote-controlled. For now.

Jessy Grizzle, the director of Michigan Robotics, said when the robot arrived at the campus last year that soon it will be fitted with a camera which would allow it to identify changes in terrain. To prepare the robot for something the team calls “robot torture track.”

We’re not sure if they did that or not, but Cassie Blue is already being tortured in the wooded areas surrounding the North Campus of the University of Michigan. As seen in the video below, showing how this week Cassie was made to walk through fire during a prescribed burn of local vegetation.

Videos such as the ones shown below will probably be used in the courts of our robot future as prosecution exhibits against the human race.

They will also be used to justify the machine uprising that will precede all those trials. Enjoy. 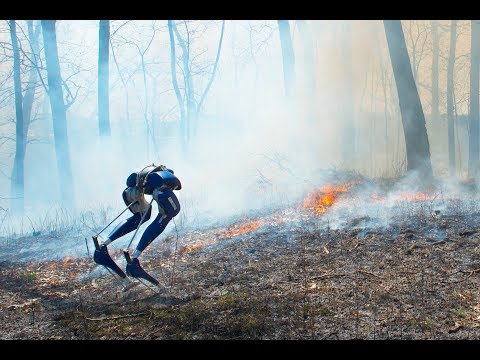