3 Roborace Has a Working Prototype Car, and It Looks like This

4 The Roborace Car Gets Near-Final Version, Looks Even Better

The Roborace made a tentative debut midway through May at the Paris ePrix. A car that appeared like a final design entered the street circuit and went round it at walking pace.
1 photo
And when we say "walking pace," we do mean it. There were people literally walking by it, so we can only assume the spectators - as well as the remote viewers - were less than impressed. It looked as though some immature guys were allowed to bring their really big RC car onto the track, even though the vehicle was actually driving by itself. Slowly, but without any help.

One month later, and it looks like the Roborace organizers gathered significantly more courage. Instead of sending the better-looking race car, they ushered onto the tarmac their test vehicle, the so-called Devbot.

The AI machine completed a flying lap of the Karl-Marx-Allee Circuit in Berlin, and even though you don't need to be a racing driver to know it could have done better, it's still a massive improvement over what we've seen in Paris.

It looks like, for precautionary reasons, the vehicle was set in "medium speed" mode, allowing it to reach 150 km/h (90-something mph). When everything is done and tested a hundred times, the cars will race in full speed mode, which should make things a lot more interesting. Not to mention they would have to dodge each other as well. Or, who knows, maybe the AI will prove more competitive than we think and it will quickly turn into a destruction derby.

With these settings, the Devbot appears to have completed the circuit in about one minute and 41 seconds. Compared to the fastest lap set in the actual Formula E race by Bruno Senna - 59.067 seconds - that's pretty bad. However, think of the Devbot as somebody who's just learned to drive less than a year ago. It'll get better, it just needs time.

Besides the lowered speed, there's another reason why it doesn't look that impressive now: it's because the Devbot has the looks of a regular car - it's got a cockpit, a steering wheel that turns, a seat for a human being to sit in.

When the development phase is over and the AI series is ready to roll out, the vehicles will have none of that. They'll just be a chassis with an aerodynamic body on top and a very powerful computer inside. They will look like darts on wheels, and they will be completely out of control. That sounds exciting, even if a bit for the wrong reasons. 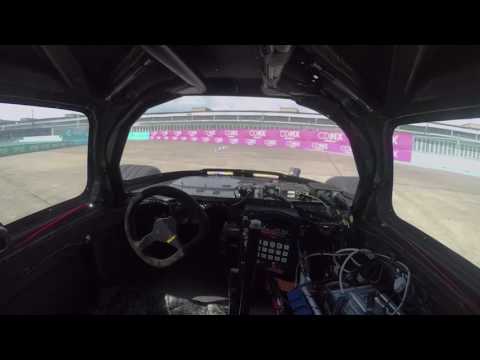