Cristian Agatie
Electric vehicles have a native talent for water fording, unlike their ICE counterparts. Not only they don’t need air to function, but they also seem unfazed by the water flooding the electrical components. A Rivian R1T owner proved this again in a real-life situation while fording a river in Mojave, California.
6 photos

Water is a problem for most internal combustion vehicles, and that’s why wading is a no-no unless the vehicle is prepared for such adventures. This implies using a snorkel to help the engine breathe air from above the water level and also waterproofing the electrical components. In case the water is drawn into the engine, it might cause a hydro lock and possibly extensive internal damage. This is because, unlike air, water is incompressible.

These are problems that electric vehicles don’t care about. They don’t need air to function and, provided the electrical components like the battery, power electronics, and electric motors are watertight, they don’t mind being submerged underwater. This has been proven time and time again by EV owners, although it is highly unrecommended.

For an off-road-oriented pick-up truck, crossing water fords is in the job description, though. This is why Rivian advertises the R1T’s wading depth at 3+ feet (around one meter) and tested the electric truck accordingly. This gives drivers enough confidence to cross rivers, as demonstrated by one owner in Mojave, California.

Nuwan Rajapakse shared a video showing what he described as “the first water crossing with his new R1T.” The video shows the R1T doesn’t seem to submerge as much as it did in the internal testing, but the water depth is nevertheless above the tire level. This would’ve stopped most ICE vehicles, but the R1T clears the river without a problem.

Although a Rivian pickup truck can cross through water 3-feet deep, this doesn’t mean it should. The R1T is still made out of metal, and metal and water never make a winning combination. And last, but not least, you are sure to be stuck with your proud electric submarine, as nobody in their right mind would buy a car that was submerged. 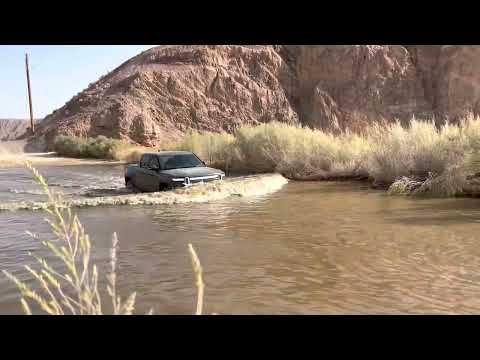