1 Join Randy Pobst on His 6:57 Winning Run at Pikes Peak in the Model S Plaid

The 100th edition of the Pikes Peak International Hill Climb is set to take place this weekend, and the mountain is already full of racers who are preparing for the event. Qualifying for the 2022 session has already begun, and Randy Pobst is back with a Tesla. He already shaved five seconds off his 2021 qualifying time.
9 photos

Racing a Tesla involves a fight with physics, as the vehicle weighs about 4,900 pounds (ca. 2,223 kg) with driver. The goal of the Unplugged Performance team is to have the fastest four-door production-based EV race car. The vehicle managed to hit speeds of up to 141 mph (ca. 227 kph) during the qualifying run, which is held on a small portion of the route.

As Unplugged Performance explains, the Tesla Model S Plaid Race Car that was driven by Randy Pobst managed to cut five seconds from last year's qualifying run despite starting its way up the mountain at 70-percent battery charge.

Doing so will dramatically increase the strain on the braking system, and they also want to assess how cutting back on regenerative braking will affect the battery during and at the end of the run.

It is important to note that regenerative braking will help keep the charge level higher than not having it at all, but its elimination may have unexpected effects on battery temperatures. The temperatures need to be within a specific range to ensure that the vehicle does not enter any kind of built-in limitation, which will be detrimental to performance the second it starts.

The team is also working on perfecting the tuning of the UP Ohlins TTX four-way adjustable Pikes Peak spec coilovers, as well as on the specific race aero developed for the Model S. While the vehicle is based on a production car, it has been adapted in many ways to make it better for Pikes Peak.

Despite the fact that this car came from the factory with a yoke, Randy Pobst continues to run a conventional race steering wheel in it, but the latter topic has already been discussed back at last year's Pikes Peak run. 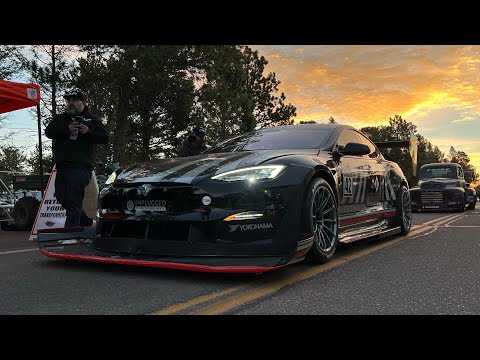