Is the Ford F-150 Lightning Really the Best F-150 Yet? One Reviewer Thinks So

The Royal Air Force (RAF) reaches another milestone, as F-35B fighters from the new HMS Queen Elisabeth fly in an international air exercise for the first time since the ship’s deployment began – and it’s a great sight!
5 photos

Some of the most outstanding aircraft from 3 major airforces showed off their skills as they flew together in the Atlantic Trident air exercise. The UK, U.S. and France participated in this important training exercise, hosted by France, that was conducted at the Mont-de-Marsan Air Force Base, on the South West French coast. The main objective of the Atlantic Trident, which took place from 17 to 28 May, was to further develop cooperation between aircraft from the 3 forces, in joint operations.

The RAF F-35B fighters joined in after the Carrier Strike Group, led by HMS Queen Elisabeth, set off on its first deployment, last week. Eight aircraft from the 617 Dambusters Squadron took part in simulated combat operations, together with aircraft from the U.S. and France. But they were not the only British aircraft to attend, as RAF’s Typhoons from XI(F) Squadron had already been exercising with the U.S. Air Force F-35As and France’s Rafale fighters, since the beginning of Atlantic Trident.

An important part of the exercise was the support from RAF’s 101 Squadron Voyager tankers. Equipped with underwing pods for refueling fast jets and a hose for fueling large aircraft, these aircraft are essential for the fighters’ endurance and power during combat. Throughout the exercise, the Voyagers refueled the F-35Bs and the Typhoons, as well as the other participating aircraft.

Atlantic Trident 2021 marked a significant moment for the Royal Air Force, as the first major multinational exercise for the F-35B fighters from UK’s newest aircraft carrier, HMS Queen Elisabeth, which is now off on her first mission.

The Carrier Strike’s Group 7 month-long deployment will cover 26,000 nautical miles until reaching the Pacific Ocean. And the Voyagers will be there, supporting the Group’s fighters, every step of the way. 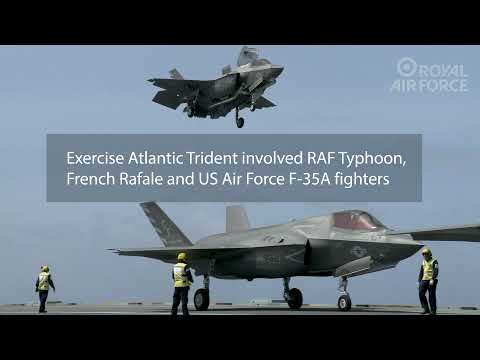