1 Tesla Model 3 Drops Pole on Self, Passengers Walk Away

2 Crashed Lamborghini Huracan Performante Is Now For Sale For Parts

3 UPDATE: 2020 Corvette C8 Has First Crash In The Mountains, Damage Is Heavy

4 BMW 3 Series Racecar Has High-Speed Nurburgring Crash, Rolls Over Six Times
Up Next

Daniel Patrascu
It's been a tough weekend for two wannabe racing drivers taking part in what appears to have been a public track day event at the Italian circuit of Monza. The two two expensive and extremely powerful cars they were driving hit each other got severely dented.
5 photos

The incident took place this past weekend, and involved a Porsche 911 GT2 RS and a Pagani Huayra. Somehow, the two got at the same corner at about the same time, and obviously ran out of room.

According to Italian website Automoto, the crash – which can be viewed in the video attached below – took place on a tight turn that comes right after a very long and inviting straight line. The video shows the Pagani already committed – albeit at a surprisingly low speed – when disaster struck.

From behind comes a rocket-like GT2 RS, speeding along as if nothing stands in its way. The driver of the Porsche is apparently trying to brake when seeing the Pagani cut in front of him, but at the speed he was going the impact is impossible to avoid.

The Porsche slams into the Pagani, nearly climbing on top of it, and then sends it off the track and into the gravel. The force of the impact pops open one of Pagani’s doors, and makes pieces of the Porsche fly away on the track.

According to Automoto, the two drivers were uninjured, but they will now have to face the financial consequences of their track encounter.

For reference, the most expensive variant of the GT2 RS – the version introduced last year – sells for nearly $360,000. The Pagani on the other hand costs in the millions. And although the two cars were not totaled in the crash, getting them back in shape will definitely cause a lot of headaches. 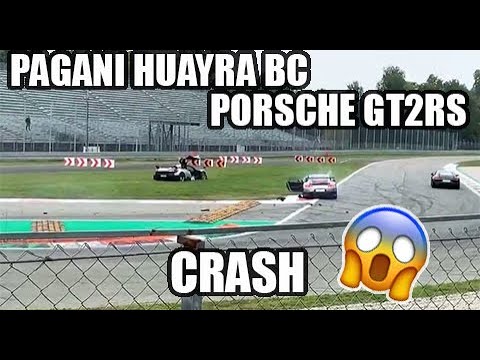