NASA’s revolutionary research jet, the X-59 Quiet SuperSonic Technology (QueSST) aircraft, is coming to life at Lockheed Martin’s famous Skunk Works facility, in Palmdale, California. Just a couple of years ago, it was only a project waiting for official approval. Now, the X-59 is excitingly close to conducting its first flight test, before being turned over to NASA.
6 photos

When it comes to commercial aviation, a decades-old ban is still preventing supersonic travel over land, mainly because of the associated "boom". NASA wants to change the status quo and, in order to do so, it needs to get official regulators to overturn the ban and, instead, establish a reasonable noise level.

To get to this point, NASA started developing a supersonic research jet that drastically reduced the sonic boom. When ready, it will operate in designated areas, in order to collect community response data, which will then be used to reevaluate acceptable noise standards.

This innovative jet, which could pioneer a new era of supersonic commercial flight, has an interesting build, to say the least. The 30-foot-long (9-meter) nose and total absence of windows are required for scattering shock waves, instead of allowing them to accumulate (which is what causes the sonic boom). Flying at double the speed of current commercial airplanes, it would reduce the sonic boom to only 60 db.

Another innovation is the Automated Fiber Placement (AFP) machine, also based on robotics technology, which takes the precision of large composite skins fabrication to a whole new level.

There are just some of the highly-advanced technologies used to bring the X-59 to life. The manufacturer recently shared a video showing how the single-piece wing, center fuselage and empennage have been coming together, over the past few months.

The final assembly of the experimental supersonic jet will be completed later this year, when the first flight is also scheduled to take place. 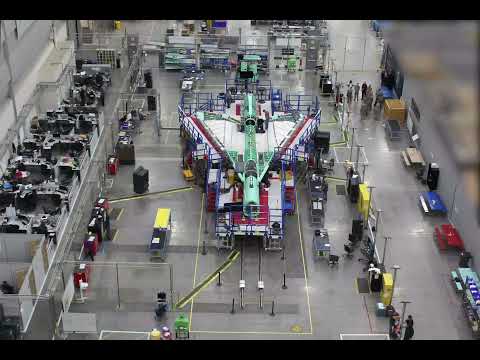