2 Thief Brags on Facebook Live About "His New Wheels," Gets Caught by Police

Home > News > U-turn
Vlad Mitrache
We've all seen movies where Arnold Schwarzenegger - or some other actor who's made his fortune from action movies - jumps from one moving vehicle to another. However, we don't mind it that much - not because we think it's plausible, but because the film had countless other instances that were even more exaggerated than this.
5 photos

It's hard to say whether these scenes served as an inspiration to some thieves or if it was the other way around, but the fact of the matter is that people have started robbing trucks on the go. Some cases were reported a few years ago, but the technique did not catch on. We wonder why.

We don't, actually. It's bad enough risking your freedom for a few cost-free iPhones, but risking the integrity of your limbs or even life? No, thank you. Unless Arnie (or rather his stuntman double) decided to go for a professional reconversion and chose to become a thief, there aren't that many people willing to try it.

Well, it looks like a group of adventurous ne'er-do-wells from Sweden found their brave pills and proceeded to relieve trucks of some of the electronic equipment they were hauling in their trailers. They did it so well that the transport company could only guess it happened during transport. We can only imagine the initial e-mails sent to the warehouse where they loaded the stuff...

Not keen on losing valuable gadgets anymore, the company decided to install some video cameras in the trailers. They weren't there to record the journey, but to broadcast a live feed to the headquarters. This way, they knew exactly when the attack was happening, and were able to call the police.

It turns out the thieves would wait until the semi truck got on a free one-lane road, approached the back of the trailer with the car while two of them sat on the hood, cut the locks and climbed on board without anyone noticing.

Their method proved not to be as fool-proof as they thought, or maybe if they had not ignored the presence of those cameras they would have still been out there. Well, at least they can sleep easy knowing Hollywood is waiting for them when they get out. 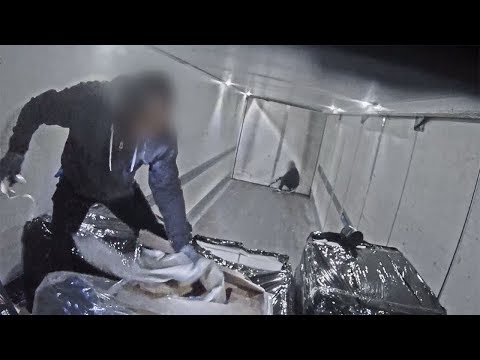