3 Mechanic Who Dropped Out of School Made a 3.6-Ton Transformer-Lookalike Robot by Himself

5 Care-O-Bot 4 Is a Mechanical House Assistant, Could Replace Maids
Car video reviews:
Up Next

Watch MIT's Cheetah Robot Walking on the Street Like a Dog

Here we were the other day, almost feeling sad someone went entirely vandal on the HitchBOT, the Canadian hitch-hiking robot that would count on people’s kindness to see the world when this happens. I mean, OK, robots may be helpful. They may take the dirty jobs off humans’ shoulders, but when you see a four-legged machine that walks on the street as if it were your dog, people will freak out.
1 photo
Every time humans are trying to replicate nature’s beasts, it feels like we get something wrong. I mean, even when this four-legged robot pops up on the sidewalk, it still doesn’t feel right. It’s like, you know it’s possible, but at the same time it simply doesn’t come naturally. By now, you’re probably wondering what has gotten into us. Well, we have just stumbled upon the latest video the Massachusetts Institute of Technology made, and it’s both mind-blowing and scary.

The footage shows their now-famous Cheetah robot walking on the street like an entirely real creature. The “walk in the park” happened last year in December, but researchers have decided to keep it away from the world wide internet until now. Along with the video, there’s a small description that reads “This may be the first time in history that a legged robot walked in the street with people.” So what? It’s still freaking the hell out of any sane person.

If we were to assume it’s the first time you encounter the mechanical beast, then we’d find ourselves forced to talk a little more of it. You see, this demon is the brainchild of the school’s Biometrics Lab, built by students to replicate the movement of an actual animal. Walking may not have been so impressive, but how does jumps over obstacles 33 centimeters in height (13 inches)? What about reaching a speed of up to 30 mph (48 km/h)?

The MIT researchers have not attained the last part yet, but they claim it will happen soon. At that point, the robot - which is powered by electricity, by the way - will be as fast as a human sprinter.

Well, we can only hope the get that time machine up and running until these beast populate the streets, because I’m surely not going to stick around. 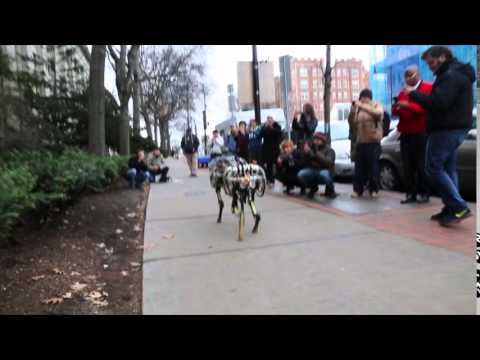