3 Mars 2020 Spacecraft Has All the Air Sucked from Around It, Survives

5 NASA Shows Spacecraft That Will Carry the 2020 Rover to Mars
Car video reviews:
Up Next

Next year’s mission to Mars is one of premieres that go well beyond its actual scope. For the first time in such an endeavor, the public is involved in a variety of ways in what the Mars 2020 mission is all about.
12 photos

At the end of last week, a webcam went live at NASA's Jet Propulsion Laboratory in Pasadena, California, capturing in real time all that goes on in the bay where the rover is being assembled. The camera, named Seeing 2020, broadcasts images and no sound, captured from the height of a viewing gallery above the room.

Aside from allowing the public to take part in the build, the camera will allow NASA to host a series of webcasts, Scheduled to take place Mon.-Thu. at 11 a.m. and 4 p.m. PDT, they are meant to answer the public’s questions about the rover and the Mars mission.

"There is so much happening and changing in the clean room, I come here every opportunity I get," said in a statement Mars 2020 project manager John McNamee.

"It is great that we can share this part of our journey to the Red Planet with the public anytime they want."

You can have a look at the live broadcast from JPL in the video section below.

The Mars 2020 rover – whose official name is yet to be announced - will take off next year and will land in February 2021 in the Jezero Crater on Mars. From there, it will embark in one of the most important missions to the Red Planet ever conducted.

The machine will purposefully look for signs of life, assess the habitability of the environment, track natural resources and hazards and, most importantly, kickstart humanity terraforming efforts by trying to generate oxygen.

For its mission, the rover is equipped with seven instruments, chosen from a total of 58 submitted for review by researchers and engineers worldwide. 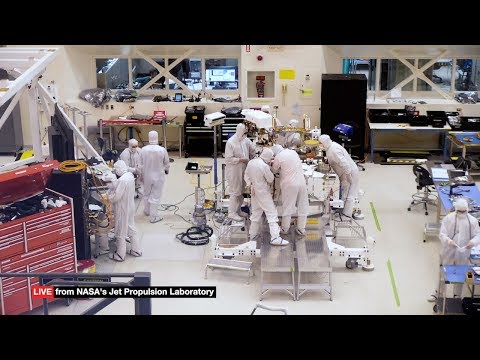