1 Lamborghini Huracan Split In Two After Crash In Chicago, Burns To A Crisp

4 Watch a Driver Ram a Lamborghini Aventador into a Tree, Splitting It in Two

The driver of a white Lamborghini Urus took the meaning of “drive it like you stole it” to the heart, causing a fiery crash in Fort Lauderdale, Florida. Despite the stop sign, his car entered an intersection at high speed, being T-boned by a Nissan Pathfinder minding its own business.
6 photos

Accidents just happen, they say, but in the case of car crashes, 99% of them have the person behind the wheel as the primary cause. A human being makes decisions, pushes the accelerator pedal to the floor, or loses sight of the surroundings at the most inappropriate moment. In the case of a car crash that happened last weekend in Fort Lauderdale, the driver failed to notice the stop sign while approaching an intersection at a high rate of speed.

Disasters are always the results of several factors. In this case, a third was coming into play besides speeding and running a stop sign. You can call it bad luck, but the police called it a Nissan Pathfinder, which T-boned the Lambo and sent it flying into the air and onto a nearby house. The impact was so violent that the Urus burst into flames, although the SUV’s driver escaped and fled the scene on foot. According to the police report, the driver of the Nissan had the right of way.

A surveillance camera captured the moment of the crash. The video shows the white Lamborghini Urus approaching the intersection at high speed. There is no sign that the driver intends to slow down, let alone stop, in accordance with the sign on the side of the road. The Fort Lauderdale Fire Rescue said that the Lamborghini occupants left the scene before the crew’s arrival and the driver of a second vehicle involved in the accident suffered only minor injuries.

Miami Herald reports that the Lambo was a rental, which might explain the “drive it like you stole it” part. Police also said they were contacted by the missing Lambo driver, who denied that he intentionally ran away from the scene. He claims he doesn’t remember anything after the crash besides being driven to a Mount Sinai Medical Center in Miami Beach. Nevertheless, the police labeled the crash report as a hit-and-run. 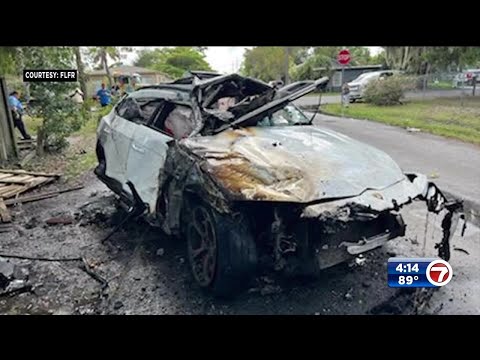