Mid-Engined Mini "V8 Conversion" Is Not Your Average Pickup Truck

Watch How ABS Can Mess Up Your Braking on Pavement

Most of us know what ABS stands for and what the system does. The technology was popularized by German companies Bosch and Daimler in the 1970s, the former responsible for development while the latter offered its Mercedes-Benz vehicles of the era for actual implementation.
11 photos

In simple terms, the ABS is meant to keep your wheels from locking when brake force is applied. A gentle push of the pedal presents no risks but hit the brakes in an emergency situation and you're very likely to clamp those pads on the discs so hard they'll prevent any rotation of the wheel whatsoever.

On dry pavement that's not such a big thing. It will transfer all the friction from the brake components to the actual tires, which means exceeding wear for the rubber, but other than that the vehicle should remain fairly easy to control throughout the maneuver as long as we're talking reasonable speed levels.

But what happens when it's wet? For the first part, the same thing: wheels lock, leaving the tires to fight for grip. That's a fight they lose quickly, which means chances are it'll end up going sideways. The chances of spinning are even higher if only the wheels on one side hit a slippery surface under braking, while the others are gripping the tarmac just fine.

The ABS prevents all this by ignoring your foot planted on the pedal and releasing the brakes for very short intervals whenever it feels that grip is fading. This can result in a very unnerving experience for the driver because it comes off as the car refusing to follow their instructions. However, the idea is that you wouldn't be stopping if the wheels locked either, so this way at least you remain in control.

So, the ABS isn't meant to help vehicles brake better (over shorter distances), but safer. Wyatt Knox at the Team O'Neil Rally School messes with the fuse box of a 2020 Toyota Tacoma to prove just that, and the results might surprise a lot of people. 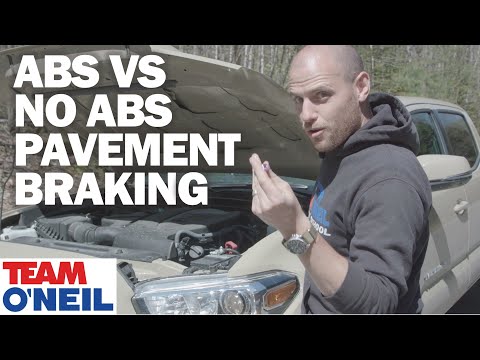